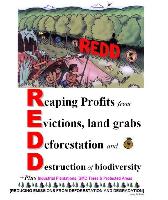 Bangkok – Carbon markets should be eliminated from any future plans to tackle global warming, says a leading group of Indigenous Peoples present in Bangkok at the latest round of UN climate negotiations.

In a report released today, the Indigenous Environmental Network (IEN)predicts dire consequences for Indigenous peoples, biodiversity and the climate alike if the new, post-2012 climate treaty being debated here allows tradable carbon credits to be produced from projects such as the Reducing Emissions from Deforestation and Degradation (REDD) and the Clean Development Mechanisms (CDM).

IEN says REDD pilot projects, in which carbon in forests would be sold to industrialized societies as greenhouse gas pollution licenses, are already threatening to sever the connections between Indigenous peoples and the forests they protect.

According to the report, REDD-type pilot projects have already violated Indigenous people’s rights and exacerbated eviction, fraud, conflict, corruption, coercion and militarization in countries such as Peru and Papua New Guinea.

“We already know that offset schemes like REDD won’t protect forests or the rights of Indigenous peoples,” said Tom Goldtooth, Executive Director of IEN. “If we are going to save the climate, we need to focus on real solutions that assure that forests will be left standing and people’s rights are respected.”

“This is the first time we have a large global delegation of over 100 Indigenous peoples that includes many from the Asian region participating in these UN climate meetings. We are standing strong, lobbying government delegates to adopt language that recognizes the UN Declaration on the Rights of Indigenous Peoples (UNDRIP)with language promoting the provisions of Free, Prior and Informed Consent (FPIC). Without this, there will be no safeguards in the climate negotiations that would ensure that the rights of Indigenous Peoples are protected. However, even if this language was adopted, many developing countries where REDD and CDM projects could be implemented, don’t recognize the self-determination and rights of Indigenous peoples. National efforts to legislate and implement the provisions of UNDRIP could take years. In the meantime REDD would continue to be implemented,” Tom added.

The report say that carbon markets such as REDD and REDD-Plus are false solutions to climate change because they do not bring about the changes needed to keep fossil fuels in the ground. According to studies of climate scientist, James Hansen, “Industrializes countries could offset 24-69% of their emissions via the CDM and REDD….thus avoiding the necessary domestic cuts that are required to peak emissions around 2015.”

IEN and many other Indigenous groups are calling instead for fossil fuel emissions to be reduced, with an aggressive goal towards a zero carbon economy. “Global warming is largely due to the extraction and combustion of fossil fuels, yet for the indigenous communities within our network, it is a “business-as-usual” scenario with the expansion of oil drilling, building refineries, expansion of tar sands development and coal mining with coal energy generation in North America,” Goldtooth says.

Using the forests of the South as a trading commodity within REDD initiatives, gives a carbon credit, or a permit to the polluters of the North to perpetuate toxic pollution, genocide and violate of treaty rights in the homelands of our communities. These petroleum companies use these carbon offset systems as a greenwash,” Goldtooth added.

“As currently formulated, REDD will neither reduce emissions nor save forests,” said Kate Horner, Friends of the Earth. “Indigenous peoples are the most important voices in this process. We need to respect their wisdom and focus on solutions that will make a real difference in reducing forest emissions and saving the climate.”

Indigenous Environmental Network is an Indigenous organization works with Indigenous Peoples worldwide on environmental justice, energy and climate policy issues. To obtain the NO REDD Report and for more information, visit: www.ienearth.org