Man shot in the head with rubber coated metal pellets by the Carabineros (Chilean National Police). On the morning of 26 November 2019 Carabineros moved into Liempi Colipi near tried to force the Mapuche off their ancestral lands. Some were shot and released and another was hospitalized. (2019) Photo: Orin Langelle/GJEP

ATTACKS FROM RIGHT-WING ON MAPUCHE PEOPLE IN CHILE

On Saturday night, 1 August, a right-wing group armed with bats and stones attacked Mapuche community members who occupied the town hall at the Municipality of Curacautín in Chile’s Araucania Region. The occupation was in support of nine Mapuche Political Prisoners’ hunger strike of more than three months. The Mapuche Political Prisoners were convicted, some without evidence, as a result of struggling for Mapuche peoples’ cause of territorial claims. Five of them are imprisoned without a trial. Saturday’s right-wing attack on the Mapuche, injuring many, some severely, was with the complicity of the Chilean National Police (Carabineros), who stood by. 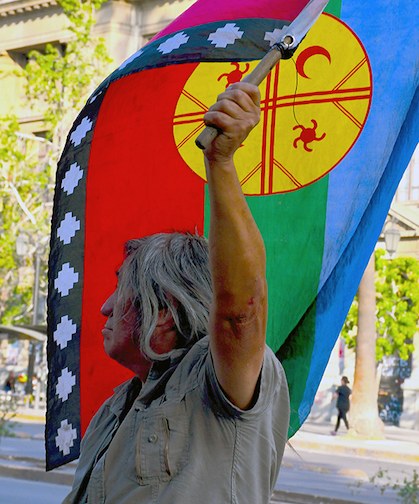 The Mapuche flag on the Santiago streets in November 2019 photo: Langelle/GJEP

The Alianza Territorial Mapuche – ATM, released a Public Communique “on violent attacks of fascist, racist and colonial origin” on 3 August denouncing the brand new minister of the interior Victor Perez. Perez, who is a known supporter of Augusto Pinochet’s former dictatorship, visited the region during the previous week. He publicly denied the existence of political prisoners in the country and is the “main political [person] responsible for the aggravation of colonialist violence in Wallmapu [Mapuche Territory].”

TeleSUR reported, “On Saturday, 1 August, Araucania’s Ultra-Right Group (APRA) spokeswoman Gloria Naveillan spread an audio message on Twitter urging people to act against the Mapuche community members. ‘How many are raising their hands to join us tonight in the Plaza? Bring sticks and everything you need to defend yourselves,’ Naveillan urged.”

In response to this racist attack, protests the next day occurred throughout Chile.

Chile Today said on 3 August, “At a time when, around the world, protests are held against racism, with the Black Lives Matter movement as the primary protagonist, Chile might be living its own “George Floyd” moment after an armed mob attacked the town hall of Curacautín. The building had been occupied for several days by Mapuche activists and the chants sang during the raid and the information released on social media afterwards indicate that this attack was racially motivated.”

Red de Defensa de los Territorios-Araucanía (Defense Network of Araucanía Territories) and RADA – Red de Acción por los Derechos Ambientales (Environmental Rights Action Network) released a statement yesterday:  “..the events that will be marked as a night of sorrow and sadness for the region of La Araucanía and Wallmapu. We demand that the current government give immediate responses to the Mapuche communities and in particular to the Mapuche political prisoners and their representatives. We demand that the events…are investigated and those who are responsible are punished.”

In solidarity of the Mapuche and demands in the Defense Network of Araucanía Territories and Environmental Rights Action Network – RADA previously released a statement . We further:

DEMAND THE CHILEAN GOVERNMENT LISTEN TO THE MAPUCHE POLITICAL PRISONERS

We stand in solidarity with the Mapuche,