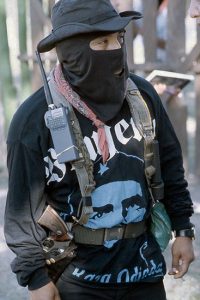 Note: Global Justice Ecology Project has always stood in solidarity with the Zapatista autonomous communities in and around the Selva Lacandona in Chiapas, Mexico.  In 1996 GJEP co-founder Orin Langelle traveled to La Realidad, home to the headquarters of the Zapatistas, in Chiapas for the First North American encuentro.  Prior to that GJEP co-founders Petermann and Langelle organized to stop the North American Free Trade Agreement (NAFTA), which the Zapatistas called a “death sentence for the Indigenous Peoples of Mexico.”  When NAFTA went into effect on January 1, 1994, the Zapatistas rose up and took over many of the municipalities in Southeastern state of Chiapas.  They created autonomous zones that continue to function to this day.

Two weeks ago in Zapatista territory, paramilitaries linked to the ruling party in Mexico looted and burned two Zapatista warehouses which stored this year’s coffee harvest. This is the latest in an accelerating series of attacks on the Zapatista project since the current administration of Andrés Manuel López Obrador (AMLO) took office.

Many of you will remember that in 2017 as Trump took office, the Zapatistas sent four tons of their coffee harvest to migrant and other communities in struggle in the United States as an organizing resource. Now we need to organize our own coffee solidarity effort—not only to help recover the cost of the lost harvest, but to show there is widespread solidarity with the Zapatista project.

The Zapatistas have been one of few voices to denounce AMLO’s purportedly “progressive” government for doubling down on previous administrations’ socially and environmentally destructive capitalist mega-projects. These policies have dispossessed hundreds of thousands of their land and resources and made indigenous and other communities resisting such projects the target of state and paramilitary repression. It is important to note that one of the principal investors in these mega-projects is the world’s largest financial firm, BlackRock [more information below].

Support the Zapatista project, a project that has not only created a horizon of dignified self-organization that has inspired all of us, but also shown profound and far-reaching solidarity with our own struggles. Solidarity means acting from the knowledge that in the face of destruction and dispossession, our best resource is each other!

Despite the unfolding of multiple crises in Mexico around the pandemic response and economic shutdown of 2020, the purportedly “progressive” López Obrador administration has accelerated the capital-intensive and resource extraction-based megaprojects that have been lurching along since the late 1980s amidst the fierce resistance of indigenous peoples and other organized communities against the ecological destruction, population displacement, and territorial re-ordering they imply.

The Zapatistas and the National Indigenous Congress warned early on that the AMLO’s mega-project makeover (the same projects under a different name) would threaten not only their own self-governing communities, but any remaining alternatives to the capitalist destruction that has ceded half the national territory to multinational mining companies, spawned narco-paramilitary forces all over the country to clear coveted territories of community resistance, and made Mexico the most violent country in the world.

Indeed, AMLO’s administration has prioritized precisely those projects affecting southern Mexico—the tourist “Mayan Train” that would penetrate the forests, bioreserves, and indigenous territories of Campeche, Yucatán, Quintana Roo, and Chiapas; the “Trans-oceanic Corridor” which will harness and industrialize the Isthmus of Tehuantepec in Oaxaca to connect the Pacific Ocean and the Gulf of Mexico; and the conversion of collective landholdings and the biodiverse forests of the southeast into sites of agro-industrial production.

We must note here that barely a year ago, the Zapatistas unexpectedly announced the creation of 7 new caracoles (centers of self-government, of which there were already 5) and 11 new Centers of Autonomous Zapatista Rebellion and Resistance (in addition to the 27 already existing autonomous municipalities),making a total of 43 self-governing entities in the state of Chiapas.

As of the 2019 deployment of AMLO’s newly formed National Guard, Chiapas is now the most militarized state in the country. Then in May of this year, López Obrador authorized the presence of the military on the streets of Mexico for the next five years to take charge of “domestic security”. The counter-insurgency role inherent in this deployment has been accompanied by the increase in paramilitary activity which, in Chiapas and elsewhere, plays the ground game of looting and burning, harassing and terrorizing local communities in the attempt to dismantle the social fabric which sustains collective resolve and resistance. In a clear attempt to further militarize the situation, a new wave of coordinated slander against the Zapatistas has hit Mexico’s airwaves, attempting to tie the EZLN to organized crime—a preposterous claim that would be laughable were its aim not the violent elimination of tens of thousands of Zapatistas for the benefit of the “Mayan Train’s” primary investor and the world’s largest financial firm, BlackRock. Not coincidentally, the construction contract for the section of the “Mayan Train” that is to run through Chiapas was granted to the army itself.

The López Obrador government dreams of pulling off what neither the administrations of the far-right PAN nor the institutionalized mafia of the PRI could: the destruction of the largest anti-capitalist resistance in the Americas that has worked ceaselessly below and to the left to create an example of a different world where we can all decide what life is for and create the organization and infrastructure to sustain it.

Help keep the Zapatista resistance alive—we all need them as a light and a source of courage for our own emerging struggles, fighting to come up through the cracks of a collapsing capitalism.

Make a donation, circulate this information, read the linked articles above, organize with your friends and neighbors, and let us know of any activities you organize at zapatistasnoestansolxs@solidarityfrombelow.org!