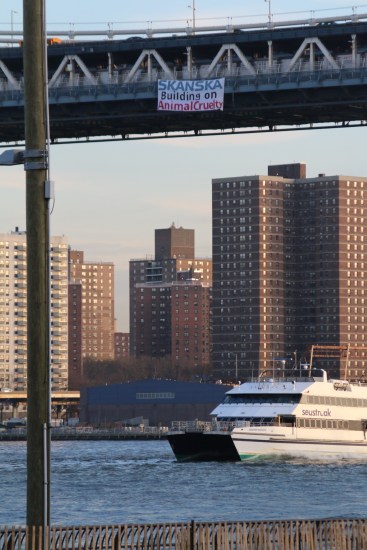 New York –  Activists with the New York City Animal Defense League (NYC ADL) were alerted that a large banner reading, “Skanska: Building on Animal Cruelty”, was dropped from the Manhattan Bridge leading up to a national protest convergence against Skanska.

New York is home to the U.S. headquarters of Skanska, the construction corporation contracted to build a massive and controversial underground animal testing facility at the University of Washington (UW). After accepting $90 million from UW to build the facility, a network of animal activists around the country – acting under the moniker No New Animal Lab – has emerged to pressure Skanska to sever the contract and stop the lab. No New Animal Lab, together with NYC ADL, are planning a weekend of mass protests centered around the company’s headquarters and top executives. The convergence, #StormSkanska: Swarm New York, will take place the weekend of January 15-17 and promises to be the most important action taken against Skanska to date.

No New Animal Lab was born out of the UW Regents’ vote to approve construction of a new underground animal lab on the University’s Seattle campus. The campaign targets UW and Skanska utilizing a diversity of tactics meant to pressure leadership and decision makers. No New Animal Lab is at the forefront of a resurgent animal rights movement, emerging from decades of political repression to rebuild grassroots networks and resist institutions and corporations that abuse animals — and to shut them down. In less than a year, the campaign has grown from an impromptu disruption at a UW Board of Regents meeting to the largest US animal liberation campaign in recent years. The campaign has included a successful lawsuit against UW, mass marches, office protests, home demonstrations, direct actions, and a recent outreach tour of 30 U.S. cities. 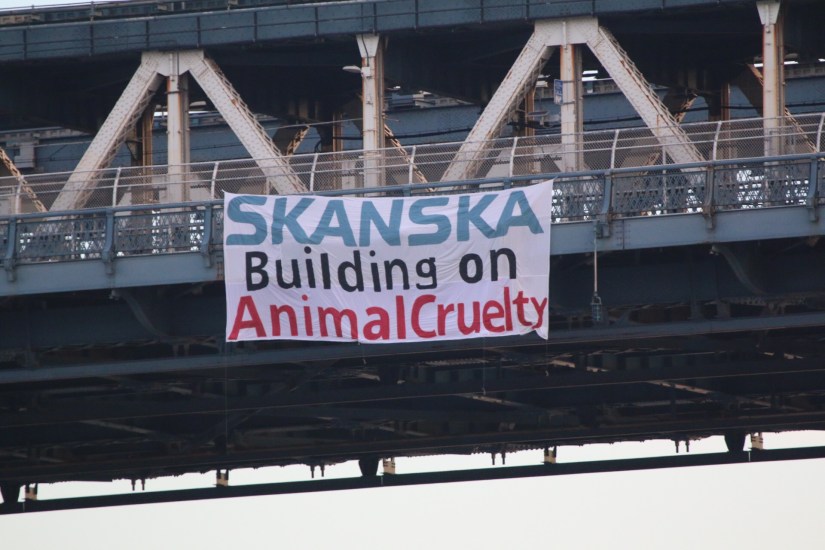