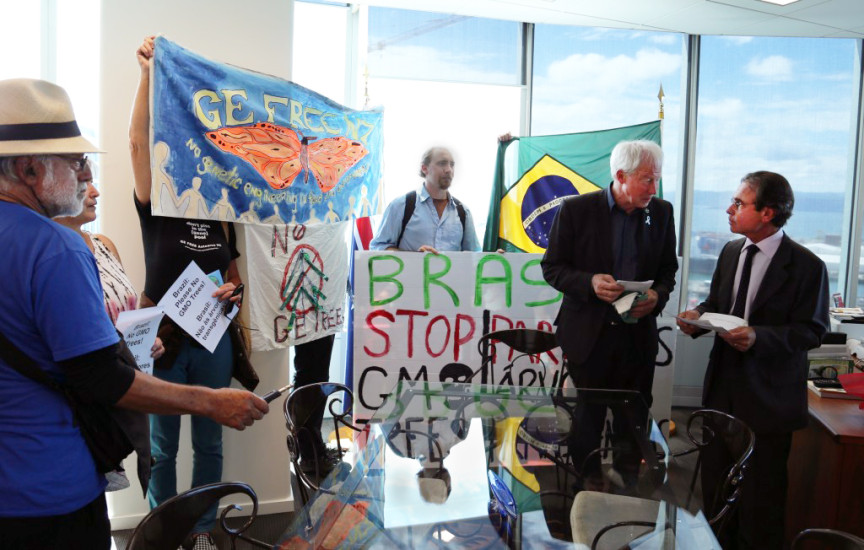 On 3 March 2015, organizations on four continents took action at Brazilian consulates and embassies as part of the Emergency Global Day of Action to STOP Genetically Engineered Trees. The groups are demanding the government of Brazil reject an industry request to legalize genetically engineered (GE) eucalyptus trees there.

On 5 March 2015, The Brazilian Technical Commission on Biosafety (CTNBio), which regulates GMOs in Brazil, will meet to decide on a request by FuturaGene to legalize the commercial development of their genetically engineered eucalyptus trees [1].

“CTNBio does not have sufficient scientific research on the serious impacts that approval of GE eucalyptus trees could cause to render a decision,” stated Winnie Overbeek, International Coordinator of World Rainforest Movement. “They only held one single public hearing on the issue back on September 4, 2014, in Brasilia, which clearly showed the insufficiency of the existing studies. Existing non-GE eucalyptus plantations are already causing serious conflicts over access to land, and living conditions of communities surrounded by them have been destroyed [2]. Approval of GE eucalyptus trees will worsen these problems,” he concluded.

FuturaGene claims their GE eucalyptus will bring environmental and socio-economic gains, but the Campaign to STOP GE Trees maintains these claims are in contradiction with the documented harms and impacts of existing industrial tree plantations [3]. The Campaign insists that the insertion of GE eucalyptus in the industrial plantation model will not alleviate but only worsen the impacts on the environment, biodiversity and indigenous and local communities.

If this request is approved, it will be an unprecedented decision, with potential social and environmental impacts not only for Brazil but around the world.

“We are at a critical juncture for stopping GE trees,” said Anne Petermann, International Coordinator of the Campaign to STOP GE Trees. “Industry requests to legalize GE trees are not just being decided in Brazil, but in the US also. And companies in other countries would like to develop GE trees. Today’s day of action shows once more that people around the world reject genetically engineered trees and Brazil must also.”

In November 2014 scientists, foresters, agronomists, Indigenous Peoples and other experts from six continents met in Asunción, Paraguay to discuss the problem of genetically engineered trees. They recently finalized the Asunción Declaration, which calls for the outright rejection of all GE trees, including those in field trials. This declaration was also submitted to CTNBio as part of the global day of action.

In the US, a similar request to the USDA from GE tree company ArborGen to legalize their GE eucalyptus trees is currently pending. [4]

Global Justice Ecology Project coordinates The Campaign to STOP GE Trees, an international alliance of organizations mobilized to protect forests and biodiversity and to support communities threatened by the dangerous release of genetically engineered trees into the environment.