An ‘Other’ Feminism: A Review of ‘Compañeras: Zapatista Women’s Stories’ 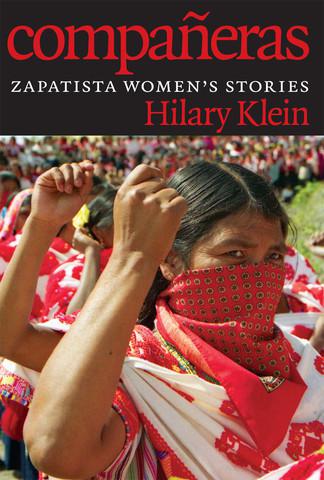 Volumes have been written about the Mayan indigenous Zapatista social movement of Chiapas, Mexico since they made their first public appearance on January 1, 1994. There have been detailed histories, political analysis, academic theorization, movement studies, activist ethnographies, non-fiction novels, attempts at cultural and symbolic translation, etc.

The movement’s primary spokesman, the prolific Subcomandante Marcos, has also contributed numerous communiqués, satires, children’s stories, erotica, pop culture commentary, political and philosophical ruminations. However, until now, we were missing the direct voices of women from the communities themselves. Hilary Klein’s Compañeras: Zapatista Women’s Stories (Seven Stories Press) reveals their perspectives as contemporary indigenous women who are active subjects together with men in shared processes of change and liberation.

Compañeras: Zapatista Women’s Stories covers a lot of ground: from the early days of recruitment and organizing clandestinely, to the steep learning curve of taking on greater political and economic participation in their communities, to their impact on the world beyond. The Zapatistas are forging their own kind of feminism, one unique to their particular histories, identities and subjectivity as modern indigenous men and women. Klein’s book demonstrates how defending indigenous culture and women’s rights need not be mutually exclusive. As Ester, a Zapatista comandanta from the Huixtán region said to the Mexican Congress in 2001, “It is the current (national) laws that allow us to be marginalized and degraded, as in addition to being women, we are also indigenous, and, as such, we are not recognized.” (p. 226)

Struggles for women’s equality are of course global, and everywhere we still have a long ways to go. What is impressive about the Zapatistas’ journey towards gender equality is what extraordinary gains have been made in twenty years. Klein’s book chronicles how the Zapatista process of working towards women’s rights was simultaneously a push from above and below. The Zapatista communities’ Women’s Revolutionary Law of 1993 was a major structural change that has since been followed by their collective project of unlearning patriarchal ways. It became clear that both men and women had to change, in both thoughts and actions. A Zapatista woman called Isabel recalls of the years after the law was passed:

We made a commitment to fight against injustice, and we knew that men and women united, with the same rights, with the same opportunities within our organization, could unite our forces against the capitalist system. But first we had to change ourselves and understand that there needs to be a revolution between men and women, in our heads and in our hearts. (p.73)

It would not be an easy process: there was initial resistance from the men, lack of confidence from the women in themselves and their abilities. Says Celina, “as a woman, I learned to speak up. I learned to defend myself. Both of us have to change, that’s what I realized back then. Men have to change, but so do women.” (p. 218). By postulating gender equity as essential for shared liberation from capitalist and patriarchal systems, the Zapatistas created a feminism for everybody: Todo Para Todos; Nada Para Nosotros, says the well-known Zapatista idiom, “Everything for Everyone; Nothing for Us.”

Although the Zapatistas do not use the term of “feminism” themselves, some movement scholars such as Mercedes Olivera have described the process unfolding as an “Other Feminism.”  This use of the word “Other” as in “La Otra” references the way in which the Zapatistas have built alternatives to dominant systems of health, education and justice that do not serve them, nor reflect their interests. Instead, they have created an Other Education, Other Health, Other Justice, etc. Therefore, an “Other Feminism” is not one derived from feminisms in Europe or the United States or even from Mexico’s cities, but rather from a collective process of building a society where all genders participate in the struggle against a capitalist patriarchy.

The process of transformation that Zapatista women have taken part in has not always been simple or linear, writes Klein; it takes time to establish a right, and then it is not always easy to exercise that right, but women now have tools they did not have in the past. This process of construction is beautifully illustrated in the words of a political education pamphlet produced by Zapatista women of the Morelia region:

The problems of inequality and discrimination are like a very large tree. Its roots are very deep and they are not easy to uproot. The government has humiliated us and discriminated against us, denying us our rights; we understand this well. But what we do not always see is that, without realizing it, we are repeating the government’s oppression against women within our own homes. We must pull out the bad roots in order to plant the new tree that we want, together, men and women . . . Liberation will not fall like a miracle from the sky; we must construct it ourselves. So let’s not wait, let us begin. (p. 250)

No one truly writes alone, as we are always building and creating in dialogue and community with so many others in a collective construction of shared knowledge. Klein’s careful research methodology is integrative, qualitative, and above all, relational. It is one based on collaboration, daily encounters and a shared political project. It includes dialogues, conversations, anecdotes, testimonies, memories, stories, meals, harvesting and rituals. She follows a relational paradigm together with an ethics of humility and transparency.  Such methodology reflects that of the Zapatista process itself, that of caminando, preguntando, “walking while asking questions” as it traces and explores their historical and lived experiences.

Although younger women are now learning to read and write in both Spanish and their own Mayan languages, most of the previous generation of Zapatista women did not. Thus it would fall to an outsider to document their experiences in writing from the many oral histories, anecdotes and interviews gathered over many years. Taking on such a tremendous documentary task is a big responsibility that can easily go awry, not only in translation, but also in navigating the multiple complexities of presenting them outside their particular communities and culture. Hilary Klein has excelled at both aspects, approaching the task with a humility and respect that allows the women’s voices to come fully forward while also providing the needed history and context that many readers will require in order to understand the Zapatista movement’s accomplishments, particularly those of its women.

Compañeras: Zapatista Women’s Stories provides the world with the voices of indigenous Zapatista women as a new political element: one being created and theorized from their own place and history, with openness to worlds and perspectives beyond. Like the movement itself, Zapatista “Other Feminism” draws upon its various indigenous and political inheritances as well as from the knowledge gleaned from their daily lives. The Zapatistas dynamically interweave traditions with external influences that reflect and advance their libratory project. It is a process of personal and collective transformation for men and women, a process of change and of becoming with the goal of achieving a common good.

Klein brings us the voices of modern, indigenous women who are active subjects in the ongoing construction of their collective autonomy. They are building a new society alongside men in a shared political project of every day struggle, one for true equality within and outside of their communities. In this, they are united in shared resistance and co-construction of a new society from which we all can learn.