While surprised by the turn of the election last night, I was not shocked.  Horrified, but not shocked.

The pundits had all but declared Hillary the winner in the days leading up to the election, but a lot of people who have been crushed by the system over the years stood up to be counted. They fell for the hateful, booming rhetoric of a billionaire businessman and TV star with no political experience-because he promised to stand up for them. He promised “change.”

According to exit polls by CNN, however, more than half of people polled are worried about what will happen in the coming years under a Trump Presidency. Over a third are more than worried, they are scared. The atmosphere is thick with sadness, rage, disbelief, fear.

After the filth of this election campaign, many will want to circle the wagons. To wait for the worst to blow over.

But that is not an option. And the fact is, no matter who won the election, we were on a collective course toward the edge of a cliff. Under Obama-the supposed face of progressive “change”-there has been no real action to address climate change. Activists at Standing Rock are being brutalized by the police for trying to stop a pipeline and protect their sacred water and land. Unarmed black people are being killed by police. Drones are dropping bombs on children in far away lands.

The system is broken, no matter who is at the helm. 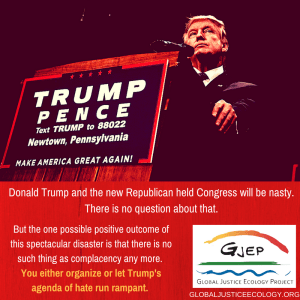 Donald Trump and the new Republican held Congress will be nasty. There is no question about that.

But the one possible positive outcome of this spectacular disaster is that there is no such thing as complacency any more. You either organize or you let Trump’s agenda of hate run rampant. There have been galvanizing moments in United States history when injustice was so potent, so undeniable that people came out in droves to be part of the force for change. I believe this can become one of those moments.

There is no political party that will do this for us. It is up to us. It is time to acknowledge that the system doesn’t work and start talking about what we do next. Time to mobilize. Time to take action for real systemic change.

That is our commitment here at Global Justice Ecology Project.  GJEP was founded to address the intertwined root causes of social injustice, economic domination and ecological destruction.  That is our mission. And we will keep organizing and building to strengthen the global movement toward the fundamental, transformational, bottom up change necessary to achieve a sane future on this planet.

I hope you will join us.