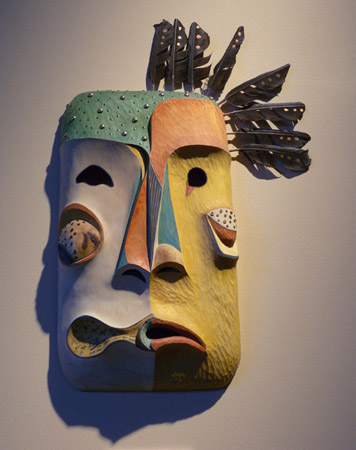 GJEP co-founder Orin Langelle took this photo of an Indigenous Alaskan mask when he was coordinating media for Indigenous Environmental Network at the First Indigenous Peoples’ Global Summit on Climate Change in Anchorage, Alaska. Photo: Photolangelle.org (2011)

Five Alaska Native tribes filed a lawsuit on Wednesday to challenge the Trump administration’s attempt to allow logging in the 17 million acre Tongass National Forest. The tribes are represented by nonprofits Earthjustice and the Natural Resources Defense Council (NRDC) and are joined as plaintiffs by environmental groups, commercial fishing groups and tourism businesses.

In October 2020, the Trump administration announced that it would exempt the Tongass from the Clinton-era Roadless Area Conservation Rule, or the “roadless rule.” The roadless rule blocks logging and road construction in specified forests. Alaskan state leadership petitioned for the reversal, which puts nine million acres of the Tongass at risk. According to the United States Forest Service, the Tongass is the “largest intact temperate rainforest in the world.”

The complaint details the environmental virtues of the Tongass. The forest is a major carbon sink and is the sole habitat of rare, endemic species like the Alexander archipelago wolf. The plaintiffs also emphasize the importance of the Tongass to indigenous groups, saying, “The Tongass National Forest is central to the life ways of the Tlingit, Haida, and Tsimshian people who have lived in and depended on the forest since time immemorial.”