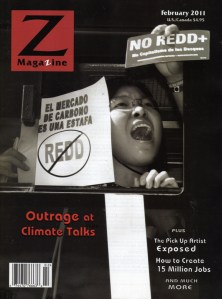 During protests against the WTO (World Trade Organization) meetings in Cancún, Mexico in September 2003, Lee Kyung Hae, a South Korean farmer and La Via Campesina member, martyred himself by plunging a knife into his heart while standing atop the barricades at Kilometer Zero. Around his neck was a sign that read, “WTO Kills Farmers.”

In 2003, Robert Zoellick was the U.S. trade representative who tried to force unjust trade policies down the throats of so-called “developing countries” under the auspices of the WTO. Today he is the president of the World Bank and is forcing unjust and ineffective climate policies onto the developing world under the auspices of the UN Framework Convention on Climate Convention (UNFCCC)-aka the World Carbon Trade Organization, as it was called by Silvia Ribeiro of the conservationist ETC Group in an article she wrote for La Jornada, Mexico’s largest leftist newspaper.

The UNFCCC 15th Conference of the Parties (COP15) in Copenhagen in 2009 exposed the true nature of the UN Climate body as it amassed the forces of the Danish Police to beat down any unpermitted protests against its inaction. When Barack Obama waltzed in with his secretly negotiated Copenhagen Accord after months of UN climate negotiations, developing countries were outraged and the Accord was not adopted.

In November-December 2010 in Cancún, the UN Climate Conference (COP16) took it even further. They laid to rest any notion that the negotiations were either democratic, multilateral, or consensus-based. Countries that had opposed the Copenhagen Accord were bribed, blackmailed, or cajoled into going along with the so-called “Cancún Agreements.” When Bolivia alone refused to go along with a text they saw as ineffective and anti-democratic, they were ignored and consensus was declared.

You can read the rest of the article by clicking here.