WWF Brutalizes Tribal People in the Name of ‘Conservation’

It almost seems that ‘conservationism’ is having hard time to learn from the past: killing, torture and the victimization of innocents (mostly tribal people) continues in the name of conservation.

Survival International has been at the forefront, taking this fight up to the highest international levels, and asking large international conservation organizations, such as WWF, to be accountable for these crime which they contribute to foster by training and equipping forest guards with heavy weapons.

It is not by chance that Survival International, in 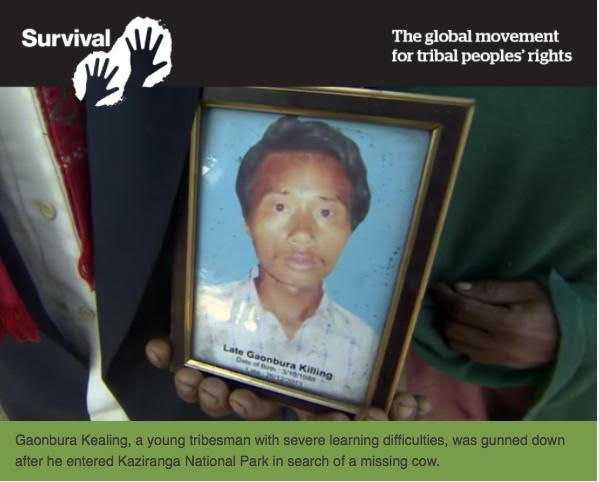 2015, has already filed a formal complaint about the activities of the World Wide Fund for Nature (WWF) in Cameroon. This is the first time a conservation organization has been the subject of a complaint to the OECD (Organization for Economic Cooperation and Development), using a procedure more normally invoked against multinational corporations.

Kaziranga National Park in India is the most infamous example of this inhuman trend… at least 50 people have been executed in the last three years, including innocent tribespeople.

Survival International is urging supporters to share the video, which is also available as an extended radio program: http://www.bbc.co.uk/programmes/p04rlrvt#play

PLEASE TAKE ACTION TO STOP THESE ABUSES BY WRITING TO THE INDIAN AUTHORITIES (see sample letter below).

Survival International, as many of us, believe that tribal peoples are not enemies of wildlife. They have been dependent on and managed their environments for millennia. They are the best conservationists and guardians of the natural world.

Bcc: advocacy@survivalinternational.org (optional, but useful for our records)

I am extremely alarmed by the human cost of militarized conservation in Kaziranga National Park. Innocent tribal people are being shot and even killed as a direct result of the park’s shoot on sight policy. These are extrajudicial executions which should not be tolerated.

I am also very concerned at plans, announced by your predecessor, to introduce this policy in tiger reserves across India. Tribal people are already being tricked, threatened and harassed into leaving their forest homes by forest officials.

Arming the guards would result in even more violence against India’s tribes and even more illegal and forced evictions.

Please issue an immediate ban on shoot on sight policies in protected areas and ensure that no further evictions take place without the genuine consent of the tribal people.