Ahead of World Bank’s release of the 2017 “Enabling the Business of Agriculture” (EBA) report this month, 157 organizations and academics from around the world denounce the Bank’s scheme to hijack farmers’ right to seeds, attack on food sovereignty and the environment.

Global Justice Ecology Project believes it’s critical that environmental protection groups respond to the World Bank when it tries to regulate the autonomy and biodiversity of local farmers from around the globe.

The World Bank’s corruption is endless. As a bully of developing nations and a friend to multi-national corporations it should be dismantled so peoples everywhere can regulate themselves.

From the Civil Societies letter calling on the World Bank to end the Enabling the Business of Agriculture (EBA):

While the EBA reforms will not benefit the majority of farmers, they will increase the profits of a handful of private companies. Only six multinationals currently control over two-thirds of the industrial seed market, and pending agroindustry mergers stand to further consolidate this oligopoly.4 The concentration of the global seed market has a significant impact on seed prices5 as well as seed diversity. Replacing farmers’ seeds with a few uniform industrial varieties contributes to the rapid erosion of global agro-biodiversity, which is crucial to address the climate crisis.

In the letter, the group demands the immediate end of the project, originally requested by the G8 to support its industry-co-opted New Alliance for Food Security and Nutrition. 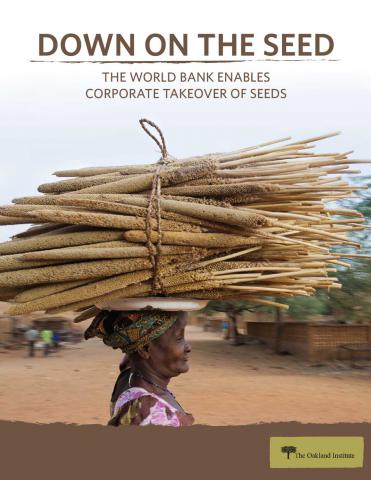 “The EBA dictates so-called ‘good practices’ to regulate agriculture and scores countries on how well they implement its prescriptions,” said Frederic Mousseau, Policy Director at the Oakland Institute. “But the EBA has become the latest tool, to push pro-corporate agricultural policies, notably in the seed sector—where it promotes industrial seeds, that benefit a handful of agrochemical companies,” he continued.

Only six multinationals currently control over two-thirds of the industrial seed sales, and pending agro-industry mergers stand to further consolidate this oligopoly. Further market expansion for these corporations depends on the shrinking of farmer-managed seed systems, which currently provide 80 to 90 percent of the seed supply in developing countries through on-farm seed saving and farmer-to-farmer seed exchange.

A new report, Down On the Seed, the World Bank Enables Corporate Takeover of Seeds, exposes that while the World Bank claims to promote “smart and balanced policies,” its EBA index blatantly ignores farmer-managed seed systems. Instead, it reinforces the stranglehold of agrochemical companies and Western nations by pushing for intellectual property rights in agriculture, so that private breeders profiteer from the use of their seeds by farmers.

The EBA also awards the best scores to countries that ease private companies—not the farmers—access to public gene banks. In addition, the Bank recommends that governments reduce the time and cost necessary to register industrial seeds, with the private sector as the predominant force on the national committees that oversee the introduction of new varieties.

“The EBA reforms aim to foster the privatization of seed systems, regardless of the consequences for farmers and the planet,” said Alice Martin-Prevel, author of the report, Down on the Seed. “The reduction of farmers as passive consumers of industrial seeds undermines their contribution to agro-biodiversity, which is crucial to mitigate pests, disease, and the effects of climate change. It also disempowers farmers, while failing to protect them in increasingly concentrated markets.”

In its 2016 EBA report, the World Bank upheld Tanzania as a model country for enacting intellectual property laws in agriculture, and becoming the first least-developed nation bound by the 1991 UPOV Convention. UPOV is a pro-industry treaty that dramatically restricts farmers’ rights to save, exchange, and sell seeds. Under Tanzania’s seed laws, farmers now risk fines and imprisonment for practicing ancestral seed saving and trading, and are being forced to rely on industrial varieties.

“The Bank, behind closed doors, convinces governments to implement reforms based on the EBA scores, thereby bypassing farmers and citizens’ engagement,” said Mousseau. “The signatories to the petition are demanding an end of the EBA as a step to enable the full participation of farmers and rural communities in agricultural policymaking. This participation is essential for development to be inclusive and to tackle the challenge of food insecurity and rural poverty around the world.”