With Deforestation Increasing in Brazil, Will Norway Ask For Its $1 Billion in REDD Money Back?

On 29 November 2016, Brazil’s National Institute for Space Research (INPE) released its estimate of deforestation in the Brazilian Amazon for the period August 2015 to July 2016. It’s not good news. Deforestation increased by 29% compared to the previous year.

Deforestation in Brazil hit a low in 2012. Since then it has increased by 75%. Last year, according to INPE, almost 8,000 square kilometres of forest in the Brazilian Amazon was cleared.

Part of the problem is that the Brazilian Amazon by Satellite Project (PRODES) excludes areas of less than 6.25 hectares. Leah VanWey, co-author of the research and senior deputy director at the Institute at Brown for Environment and Society, said,

We showed that while deforestation in large plots of primary rainforests has declined, it has expanded in these areas not tracked by PRODES.

In an article in Nature, Jeff Tolleson quotes Paulo Barreto, a senior researcher at the Amazon Institute of People and the Environment, as saying that the size of the forest tracts that are being cleared is increasing. Tolleson notes that this is “a sign that the major players are investing in illegal deforestation”.

In August 2008, Brazil set up the Amazon Fund as a REDD mechanism, with US$1 billion funding from Norway up to 2015. The money arrived too late to take any credit for the reduction in deforestation since 2004. Here’s a graph showing the rate of deforestation in thousands of square kilometres since 2004, with the period of Norway’s REDD payments overlaid: 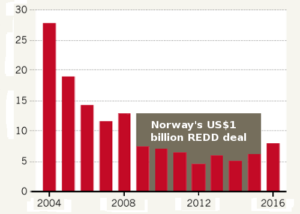 Brazil with its Amazon Fund is beginning to implement large scale REDD projects. The lessons learned from this experience should prove useful to managing the expected large infusions of international financing for REDD projects in Brazil and elsewhere coming out of Copenhagen. Further, the capacity being developed at all levels – national, state and local – in handling REDD projects in Brazil will be beneficial to funding from the United States in the future, whether through USAID, TFCA [Tropical Forest Conservation Act], or forest offsets related to a cap-and-trade arrangement. It is good sign of growing maturity and independence that the GOB [Government of Brazil] is contemplating using some of the substantial oil revenues it expects to receive from exploiting its massive offshore oil reserves to address climate change through the new National Climate Change Fund.

With deforestation currently higher than it was when Norway’s payments to the Amazon Fund started, one lesson to be learned would appear to be that US$1 billion is nothing like enough to stop deforestation in the Amazon.

At the press event for the launching, Environment Minister Carlos Minc announced that Norway is expected to make the first contribution in September for a total of USD 100 million. Minc announced that the government has a target of USD 900 million for the first year. According to Eduardo Bandeira de Mello, the head of the Environment and Social Responsibilities Department of Brazil’s National Development Bank (BNDES), which will manage the new fund, it could receive as much as USD 21 billion by 2011.

In return for its funding of the Amazon Fund, Norway received a certificate showing the reductions in carbon emissions resulting from their contributions. The certificate is not transferable and Brazil refused to allow any emissions rights or carbon credits as a result of the funding.

However, it seems that other benefits were available to Norway, as the US diplomats commented:

Coincidentally, the Norwegian DCM [Deputy Chief of Mission] said the Prime Minister’s top priority for his upcoming visit to Brazil is to strengthen ties in the area of exploring and developing the newly discovered off-shore oil and gas reserves. He explained that Norway had many companies that would be able to supply a significant quantity of goods and services to Brazil in this area. Further, the Norwegian government had the technical advisors who could help a country follow the “Norwegian Model” in developing its oil sector. While there is no talk of a direct linkage between contributions to the fund and gaining oil and gas contracts (which would be inconsistent with ODA rules), the contributions could well have a positive impact.

And that is why Norway will not be asking for any of its US$1 billion back, no matter how steeply deforestation rises in Brazil. Asking for money back would no doubt not have a positive impact for Norway’s oil and gas industry operations in Brazil.

← Standing Rock: A Critical Moment in Fight Against the Dakota Access Pipeline
The Voice of Berta Cáceres Has Become the Voice of Millions →