On what would have been indigenous and environmental movement leader Berta Cáceres’ 45th birthday, we reproduce this letter from her daughter Laura. Cáceres was assassinated in her native Honduras just before midnight one year and one day ago. Her birthday party had already been planned.

The Civic Council of Popular and Indigenous Organizations (COPINH), the Lenca indigenous group Cáceres cofounded in 1993, continues to work for justice for indigenous peoples and territories, for protection of the earth, and for democracy in Honduras. Like its cofounder, COPINH’s vision goes far beyond defense, instead espousing and creating new relationships among people and with Mother Earth and transformative political and economic systems.

Berta, capable of indignation at every injustice in the world, rebelled against them and fought against them. Because of that, she saw everything as cross-cutting [achieved intersectional thought], she understood that capitalism, patriarchy and racism have to be fought all together.

I remember, as if I had lived it, the girl with long hair, with toothaches, who was a child messenger carrying clandestine letters to help the struggles in Central America, specifically in El Salvador, back in the 70’s. I also remember the young woman, with nothing to eat, looking for work in sweatshops, a job that wasn’t given to her because she was pregnant. I remember her – almost a child, without food, pregnant, in a resource-poor neighborhood in a forgotten city – contributing to the struggle however she could. Capitalism was in full force. I also remember the woman who decided not to have more daughters, but the system told her that she could not make decisions about her own body, that she had to give birth again. Patriarchy made its entrance. I remember her with a bruised arm, I remember and lived it, the police had beaten her. Indigenous people don’t have the right to struggle for their lands. Racism showed itself.

This country is so battered, with US military bases, with 30 percent of the territory granted to transnational corporations, companies that take over ancestral territories, with projects like the free trade zones, which are new forms of colonialism, with the sale of oxygen – REDD+ – which is the privatization of forests, with high rates of poverty, violence, femicide. In this country, the pain turns to rage, because they have stolen Berta’s arms, they have robbed me of my mom’s arms. This country, which is humanity itself, refuses to resign itself to this assassination. 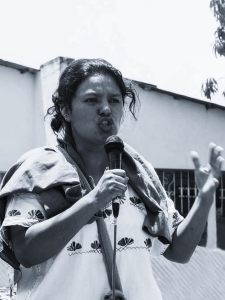 Berta Cáceres fought for this country, because the mother fought for the world. She was passionate about her land, where her Lenca people are, her roots; and she was horrified by the sinister and violent forms with which imperialism acts here, with the experiments that they carry out.

The mother, my comrade in struggle, Berta Cáceres was a hindrance to the system, because her political clarity, the constant development of her discourse, and her movement-building prowess, would not allow looting extractivism, exploitative capitalism, enslaving racism, violent patriarchy, and murderous imperialism to advance freely.

She, the mother, the lady, the commander, my mommy, Berta Cáceres with oppression piled atop her, she rebels against death, she climbs inside the heart of a people that have no borders. Berta has multiplied and there is not an assassin who can kill her.