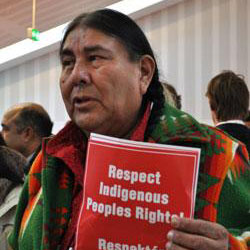 From the Facebook page of Tom Goldtooth,  Director of the Indigenous Environmental Network:

Our network is singing the victory song at the moment with the Standing Rock Sioux Tribe and thousands in the Oceti Sakowin Camp. However, we are cautiously hopeful that this is a total win.

Dakota Access LLC pipeline (DAPL) will likely appeal the Army Corp’s decision, or go rogue and proceed to drill under the river/lake. If they appeal, this would mean the incoming President Donald Trump and his Administration would become the decision makers of this pipeline. Trump promotes fast-tracking and would probably reject any recommendations for a full Environmental Impact Statement (EIS). It doesn’t look good. We might be here for the long haul.

If DAPL goes rogue and proceeds to drill under the river/lake, they could risk investers bailing. They will be closely monitored. They have indicated they will remain commited to finishing the current pipeline project. We will continue our prayers and ceremonies. We must continue the divestment campaign and initiate all options to cut the head off this black snake.

On another potential front, we suspect Trump will try to bring back the Trans-Canada Keystone XL tar sands pipeline development that was previously halted in the upper plains.