A water protector ascended a 25-foot steel tripod structure erected in the street in front of the Public Utility Commission (PUC) office to demonstrate ongoing resistance against Enbridge’s proposed Line 3 tar sands pipeline. Today marks one of the final public hearings held by the PUC on its decision to grant a certificate of need to the controversial pipeline.

All five of the directly affected Objibwe Tribal Nations in Minnesota oppose the dangerous project because of the threat it poses to their fresh water, culturally significant wild rice lakes, and tribal sovereignty. Line 3 will accelerate climate change by bringing carbon-intensive tar sands bitumen from Alberta to refineries in the Midwest. Climate change disproportionately impacts Indigenous and frontline communities across the world. This deadly infrastructure project is another example of the genocidal legacy of colonialism faced by Native peoples and the ecological destruction caused by corporate greed. Water protectors, climate justice advocates, landowners, and faith leaders stand united alongside Native communities against this dangerous pipeline. 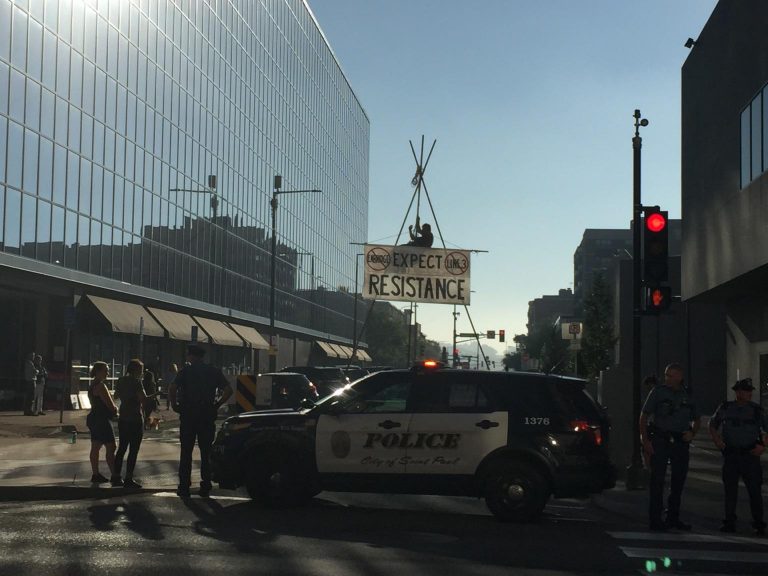 At around 7AM CST water protectors blockaded traffic by erecting 25-foot steel poles in a tripod structure on 7th Pl. in front of the PUC offices in downtown Saint Paul, MN. Ben, a 30-year-old Minneapolis resident, ascended the structure and unfurled a banner that reads, “Expect Resistance,” a clear message to Enbridge and the PUC that fierce opposition to this pipeline will continue to grow at every stage.

“If the PUC doesn’t stop Line 3, then we will,” said Ben, suspended from the 25-foot structure in the street in front the PUC. “Today’s action isn’t about me but is a demonstration of the growing resistance to Line 3. ” Ben continued, “We’re taking action in solidarity with Native people, who continue to fight for their existence on occupied land and with people all over the world who resist the desecration of nature by extractive industries.”

For photos and live updates go to: twitter.com/ResistLine3