Wally Menne: A Lion Among Men

The Loss of a Giant 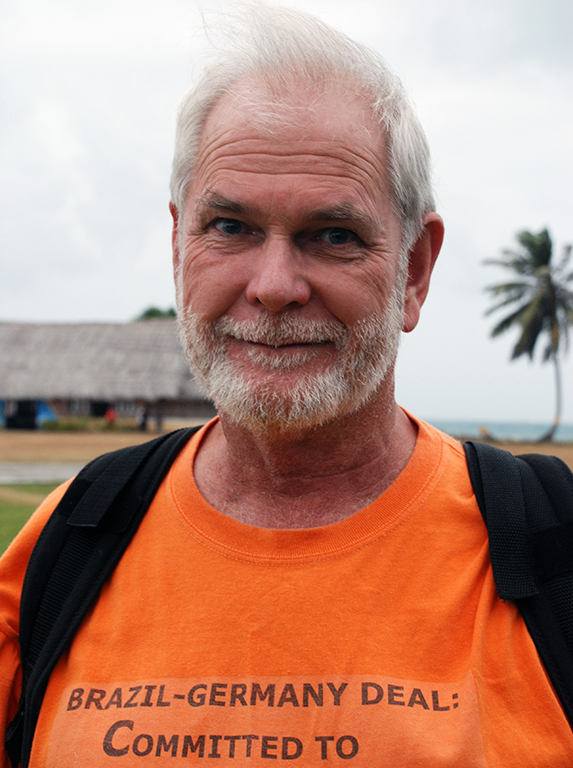 My partner Orin Langelle and I were shocked and saddened this morning to learn of the death of friend and colleague Wally Menne who passed away on Thursday 26 October.

We had known Wally for many years and his loss was like a dagger.  I had met Wally when he organized the founding meeting of the Durban Group for Climate Justice in his hometown in 2004.  Orin met him a couple of years later at a gathering of the Global Forest Coalition.

The loss of this important South African activist was sudden and surprising.  Wally was a powerhouse, a giant. His force was impossible to ignore. He was dedicated and uncompromising with a seemingly endless supply of energy despite his years at the grindstone.  Even now, it is difficult to imagine a movement without him.

I heard from Wally only a few days ago with information on a possible volunteer for GJEP—someone whose writings he had come across who impressed him with her no-nonsense critique on the problem of industrial tree plantations—his personal crusade. 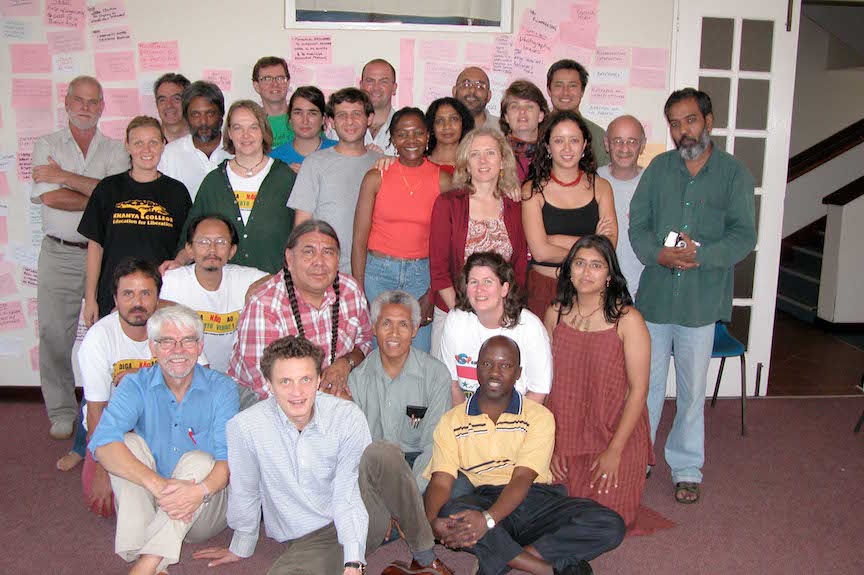 Anyone who knew Wally knew this about him.  He was passionate about ridding the Earth of the scourge of timber plantations and was one of the most knowledgeable on their extensive social and ecological impacts.  He had no qualms about laying the blame for this devastating problem squarely at the feet of those responsible–not merely the corporations whose plantations they were, but the agencies and organizations who laid their groundwork and made up excuses to enable their expansion.  In particular he targeted the UN Food and Agriculture Organization (FAO) and the Forest Stewardship Council (FSC). 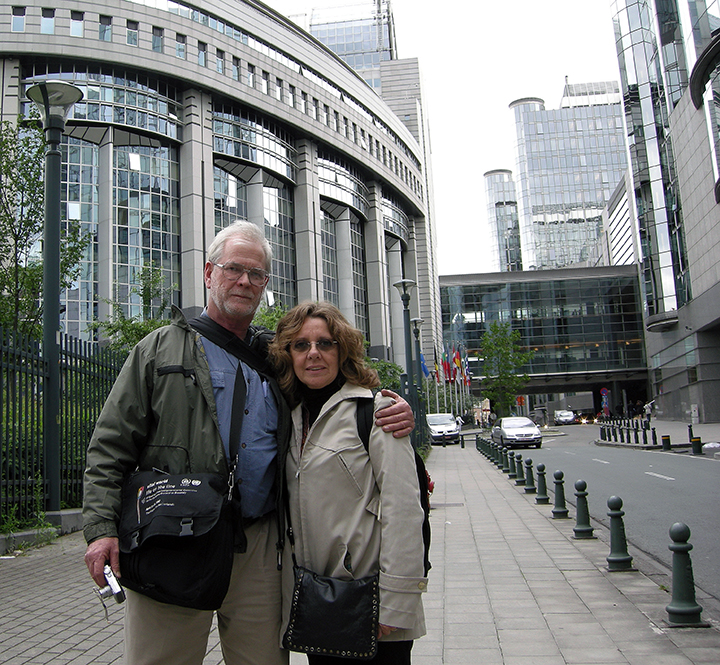 Wally Menne with Ana Filippini of World Rainforest Movement in front of the European Parliament in Brussels, 2007. Photo: Langelle/GJEP-GFC/photolangelle.org

The FAO won Wally’s wrath through their insistence on promoting a definition of “forests” that included industrial timber plantations.  This despite the obvious fact that forests support communities, biodiversity, clean water and climate stabilization; and plantations destroy forests, communities, biodiversity, clean water and the climate.  2 + 2 will never equal 5 no matter how much Newspeak the FAO puts out claiming it does. 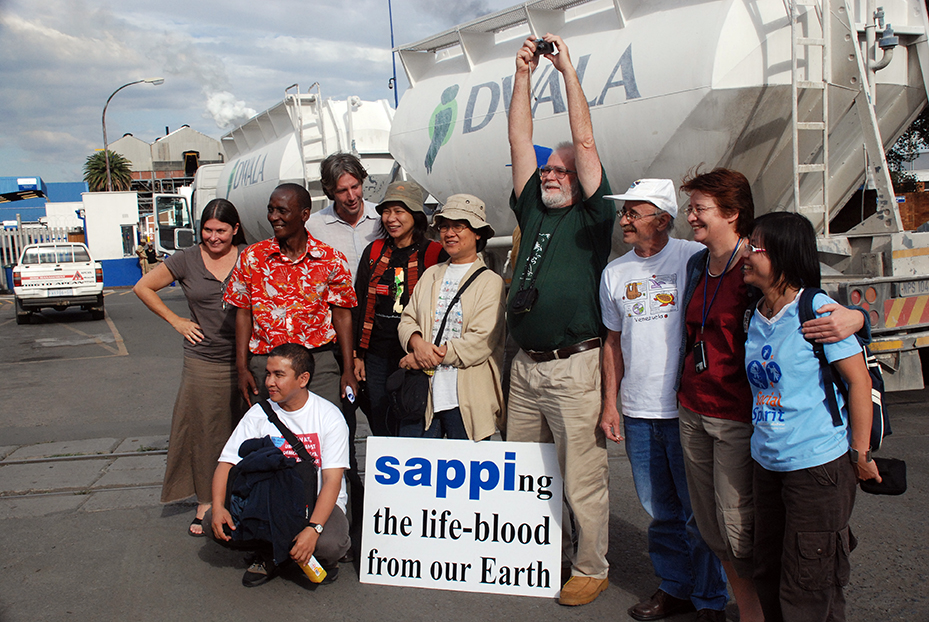 Wally Menne, in center with hands above head, during a protest against a SAPPI pulp mill in South Africa. Photo: Langelle/GJEP-GFC/photolangelle.org

The FSC was dogged by Wally’s incessant criticism due to their support and legitimation of the timber plantation model.  The FSC became a multi-billion-dollar brand by giving corporations sustainability certification for their timber monocultures, enabling them to sell their plantation-derived products as “green,” despite the real, on-the-ground consequences of that model.

On October 22nd, Wally wrote the piece below, promoting a new blog on the problem of plantations.  I think it is a wonderful example of the anger and passion that Wally wielded with such skill, and of his ability to address not just the problem of plantations, but all of the issues connected to them.  In this case, wood-based bioenergy.  A timely post, given the upcoming UNFCCC Climate Convention early next month.

“The debate around the negative impacts of burning tree biomass to generate energy or to manufacture liquid biofuels has been escalating over the past ten years, with ample evidence having been presented of the harmful effects of government and UN policies that promote this false solution to climate change.

“However, the extremely greedy and powerful land-grabbing industry has managed to capture most of the international institutions that are supposed to act as the protectors of our planet, its people and its biodiversity. The prime example of this is the FAO. The FOOD and AGRICULTURE organisation of the United Nations, which has been co-opted by big bad business through tireless propaganda campaigns to undermine and to weaken the outcomes of political processes and to promote false promises under the guise of projects and programmes such as the Green Economy, REDD+, renewable energy targets and even targets to reduce biodiversity loss and deforestation.

“It is becoming increasingly obvious that these efforts are highly unlikely to bring about their intended results, and that instead they are only creating a false sense of there being no urgency for governments and individuals to take the initiative and to act decisively on their own in implementing the changes that are needed. In other words, all the hot air being pumped out at meetings of the CBD, UNFCCC, FAO, UNFF and the rest, is only serving to delay the implementation of real solutions, so that the owners of the industrial corporations that benefit from these long drawn-out processes can continue to profit at the expense of the majority of the people on our planet.”

We will miss Wally and the huge hole left by his absence.  We hold his wife Rose and son Adam in our hearts at this terrible time.