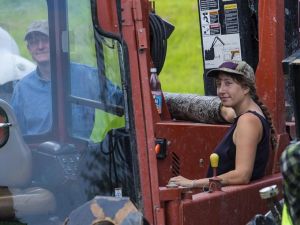 Demonstrator locked down at a VGS pipeline protest.

Vermont Groups and citizens in opposition to the Vermont Gas Pipeline are celebrating the January 12th announcement from the federal Pipeline Hazardous Materials Safety Administration (PHMSA) stating that they will be opening an investigation into whether construction of the pipeline has been in compliance with minimum federal safety standards. Citizens are demanding a halt to further construction, pending outcomes of the investigation.

Indications that VGS was not in compliance began with inspection reports filed in June 2016.  In August the Department of Public Service filed a “Notice of Probable Violation” with the company alleging failure to comply with various standards pertaining to electrical safety. VGS was then granted three extensions on the timeline for responding to those allegations, and in the interim was allowed to continue construction through November without demonstrable proof they had addressed the safety violations. In November VGS and the DPS filed a “Memorandum of Understanding” regarding the allegations. This, citizens say, is a bit like “closing the door door after the cows have already left”.

On October 15th, 2016 groups from around the state (including 350 Vermont, Protect Geprags Park, Rutland Area Climate Coalition, Toxics Action Center, Just Power, Upper Valley Affinity Group, Central Vermont Climate Action, and Vermonters for a Clean Environment) as well as 113 individual  citizens filed a formal request with PHMSA requesting that the agency step in on an emergency basis,  to oversee and investigate the construction.

The Notice of Probable Violation focused around safe construction standards in proximity to high voltage transmission wires, which causes induced voltage in the steel pipes.  Proximity, or “colocation” of wires and pipes in utility corridors is increasingly common, and the associated problems from induced voltage are cited by various authorities as an electrocution threat to people coming into contact with pipes, and also as a long-term cause of pipeline corrosion, leading to leaks and potential explosions.

The Interstate Natural Gas Association of America published “Criteria for Pipelines Coexisting with Electric Power Lines” in October 2015 ,reviewing factors that affect induced voltage.  Among those is the distance of colocation, with distances of 5000 feet (less than a mile) cited as “high risk”.  Through Hinesburg and adjacent towns, the VGS pipeline is collocated over distance of more than ten miles.  Meanwhile, citizens have observed and reported to PHMSA on various other concerns including apparent shallow pipeline burial depth, valve stations in standing water, and pipes partially submerged in water, among other issues.

Rachel Smolker, a member of Protect Geprags Park in Hinesburg stated: “I am thrilled that PHMSA is going to launch an investigation. It is clear that this project was rushed through in the face of strong public opposition and serious cost overruns.  In Hinesburg VGS is just now beginning construction through Geprags Park even though the granting of an easement through public park land is currently under appeal at the VT Supreme Court.  It is an outrage that they are allowing construction to proceed even before the case has been heard in the court, and even more outrageous given that we have good reason to believe construction has been done hastily and shoddily.”

Jane Palmer, a resident of Monkton living alongside the pipeline stated: We have had to take matters into our own hands to learn about standards for safe construction because it is nearly impossible to get relevant information from VGS or other sources.  Meanwhile we can see with our own eyes that pipes are strung under transmission wires, sometimes sitting in standing water.  In places it appears they were not buried as deeply below the surface as required.  Vermont Gas just keeps telling the public that everything is fine and that they are eager to deliver “safe, clean and affordable” gas.  We live right alongside this pipeline and have absolutely no trust in VGS or confidence that construction was done properly.

Since delivering their initial request to PHMSA on Oct 15th, Citizens have been learning about and documenting more concerning issues regarding pipeline construction, and will be delivering further documentation to PHMSA in coming weeks.  Meanwhile, they are requesting that PHMSA, the Vermont DPS, and governor Phil Scott call a halt to any further construction until the investigation has been completed, including investigation of construction already done between June and November 2016, and results are made public.