Students and Protesters Disrupt Spencer at Every Level

While climate change is impacting communities all over the world, taking lives, destroying people’s homes and livelihoods — while people of color, developing nations and indigenous peoples bear the brunt of industrial capitalism fueled climate catastrophe, white men have figured out how to convince other white men that they are the victim; enter the Alt-right.

On Oct. 19, 2017, I went to the protest against Alt-right white nationalist Richard Spencer at the University of Florida (UF) in Gainesville, FL. I saw an estimated 70 police cars in line to enter the university while driving to the protest. The university and surrounding street entrance were on serious lock-down.

Paid for by what appeared to be the City of Gainesville itself, the intersection of Hall and 34th were blockaded with 18 wheeler semis carrying construction equipment and city trucks that eerily claimed “every path starts with passion”.

National Guard, Florida State Troopers, Alachua County Sheriffs and other outfits of law enforcement were posted on the ground, in the air and on the rooftops of the building. Several banners and signs proudly displayed an exhaustively long list of items that could not be brought into the prohibited items zone.

Water bottles, backpacks, bandannas, were on the list of items. The list although alleged for “protection” was designed in order to isolate and starve any long lasting skirmishes or events held by protesters. It also was an attempt to prevent protesters from protecting their identities, as merely showing up to a protest against a fascist can get you “doxed” meaning you are identified publicly and targeted by white supremacists, let alone being documented by the police. 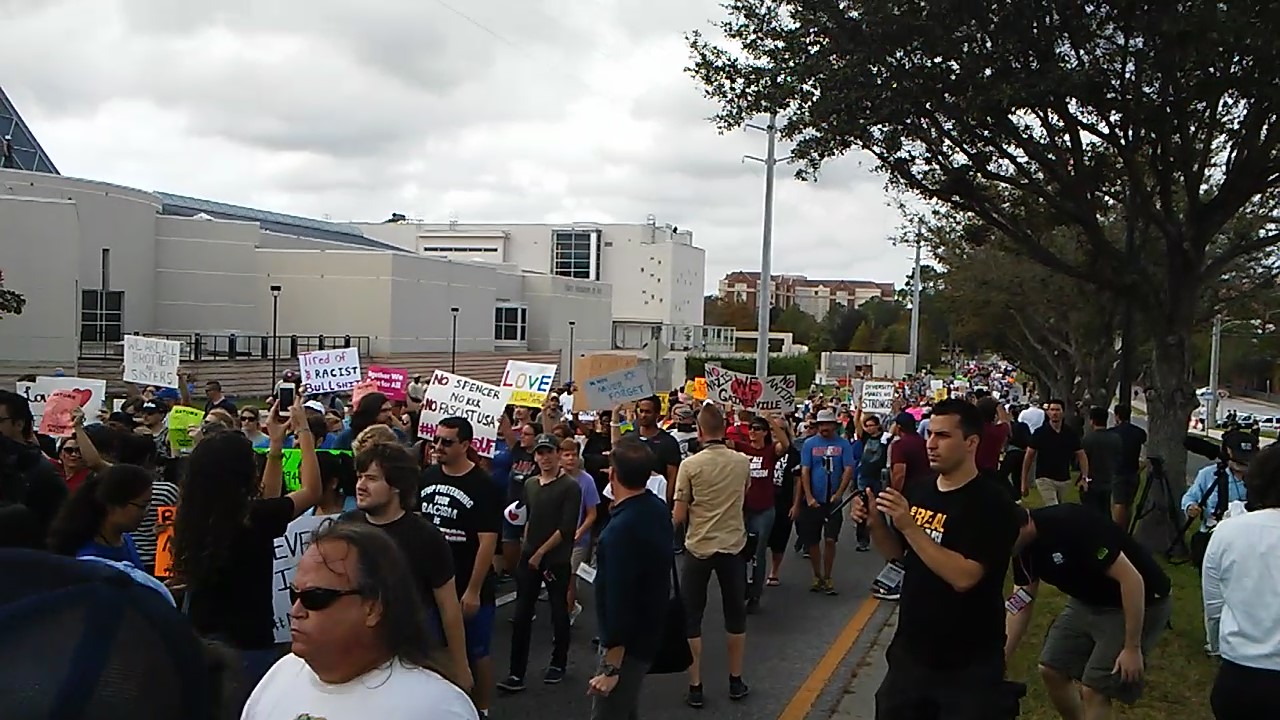 Bathrooms near the entrance to the building where Spencer was set to speak were also locked, preventing access to fresh water, physical needs, and any semblance of privacy. UF (and ultimately the taxpayers because it is a public university) decided to blow around $600,000 in security for the event and turned the campus and surrounding areas into a police state instead of denying Spencer access to speak.  At the very least, UF could have fought Spencer’s appearance legally. All this taxpayer funding and effort was for one single fascist.

UF will carry the historical shame of hosting Richard Spencer, but at least students, faculty, locals, and those from all over the region can look back and remember the thousands who gathered in opposition to his life-threatening messages. Yes. Life threatening. The concept that “America” was founded by whites not only attempts to erase those indigenous to this continent before white colonizers arrived. It also waters down the concept of “genocide” to a term like “founding”,  perpetuating a present-day erasure of people. This, in part, is why indigenous women face some of the highest rates of murder and sexual assault when compared to other demographics.

Life threatening: Richard Spencer saying Heather Heyer was a scapegoat, that Charlottesville car attacker James Alex Fields was scared of the crowd he drove through. Spencer twists the situation around, making Fields the victim and not Heyer, who lost her life, and the others who were injured from the incident.

Life threatening, because a white supremacist supporter of Spencer named Tyler Tenbrick shot at, but missed, a persyn of color at the protest at UF from his vehicle. This is what Spencer breeds. This is why we react. This is why we stand up and must not back down. 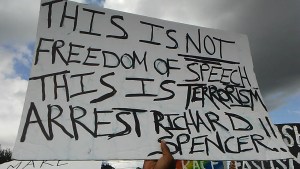 Spencer’s group, the National Policy Institute, was able to control ticket distribution for his UF talk, so unsurprisingly, many people of color were turned away at the ticketing area. Only two rows of Spencer’s supporters got into the event, the rest of the auditorium was filled with protesters who disrupted him throughout the event till he ended it early. On both the inside and outside, people against white supremacy and for equality had a strong presence, drastically outnumbering Spencer supporters.

UF made $10,564 in rental money on the Spencer event. The school should return the money to the students and create policies like Texas A&M that make it harder to sponsor fascist rhetoric in the future. This is the rhetoric which turns into interpersynal violence on the streets and state sponsored violence in government policy. The trauma of having to go through a state of emergency where you go to school because of something you don’t consent to, in addition to igniting violence and re-invoking historical trauma onto the campus deserves financial compensation. One student had a sign that encapsulated this point very clearly: “I came to college for education, not racism.”

If white supremacy goes unchallenged, capitalism will continue to perpetuate its violence on the earth and the people that inhabit it. Capitalism is rooted in an elite class, and without dismantling systemic racism, climate change will continue to spiral out of control. And those most impacted will be those least responsible for it.