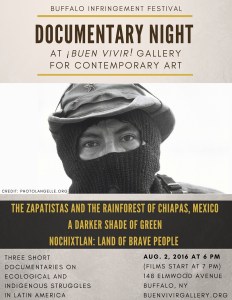 Global Justice Ecology Project (GJEP) is proud to present the following three documentaries for you to view and share. GJEP‘s Executive Director, Anne Petermann and Orin Langelle (Gallery Director) worked on two of the three films listed below which were shown at the ¡Buen Vivir! Gallery for Contemporary Art on Tuesday, Aug. 2 as part of the Buffalo Infringement Festival.

Film #1 – Lacandona: The Zapatistas and Rainforest of Chiapas, Mexico

While it has become quite trendy among politicians in the US to denounce global trade deals, especially NAFTA (the North American Free Trade Agreement), this first film from 1996 documents the origins of the fight against NAFTA in the jungles of Chiapas, Mexico.  While 20 years old, the issues in this film are just as relevant today.

As this film shows, on January 1, 1994, the day NAFTA went into effect, an army of Indigenous Peoples, some using only wooden cut outs as guns, emerged from the jungles of Chiapas, Mexico to fight against this trade deal that the Zapatistas had condemned as “a death sentence for the Indigenous Peoples of Mexico.”

Today, as social movements around the world continue to resist unjust “free” trade agreements such as the TPP (TransPacific Partnership), the Zapatistas continue to be an inspiration.

For more details on this issue, please read “On the 20th Anniversary of the Zapatista Uprising”

Film #2 – A Darker Shade of Green: REDD Alert and the Future of Forests

This film critically examines government and UN schemes to use forests in Mexico and Brazil to “offset” greenhouse gas emissions in the US and the impacts these schemes would have on communities in all three countries.

It was filmed in 2011 in the village of Amador Hernandez in the Lacandon Jungle of Chiapas, Mexico; as well as Acre, Brazil and Richmond California.  It is a film about the power of resistance by local communities and Indigenous Peoples against unjust false solutions to climate change.

You can also view a photo essay from Amador Hernandez here

This film documents ten years of resistance by teachers in Oaxaca against repressive policies put in place by the government to break the power of the teacher’s union and pave the way for privatization initiatives.

For more information on this issue, please read “A Oaxaca Teacher Explains why Educators in Mexico are Under Attack”