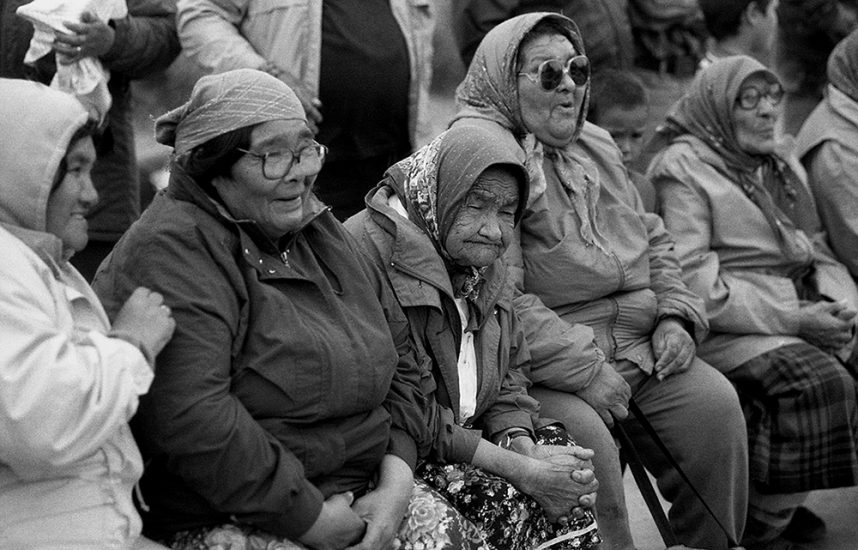 Elder women during the First Annual Whapmagoostui (Great Whale) Gathering Quebec, Canada 1993. Photo: https://photolangelle.org/2013/03/environmental-portraits/ In opposition to the destruction of their homeland, Cree Robbie Dick said, “The importance of saving the environment is as important as saving one’s life.” Cree Helen Atkinson further stated, “Cree culture has a lot to offer in the area of nature, which is something very much needed in the world. In western society, everything is segregated. That is what is ruining the world. People have to think more holistically about their actions. Everything comes down to ‘how much money can I make from this.’ Until this changes, all this talk of environmental protection is bullshit.”

Note: Thirty years ago, in 1991, GJEP Co-founders Anne Petermann and Orin Langelle joined the Vermont coalition effort to stop the megadam-age caused by Hydro Quebec’s plans to dam up all of the major rivers running into James Bay.  This included a 1993 documentary expedition to the region to meet with Cree leaders and activists about their opposition to HQ’s then-plans to dam the Great Whale (Whapmagoostui) river. The expedition took hundreds of photos of the people and land threatened by the dams, as well as the devastation already caused by the existing La Grande dam project, which destroyed the Cree village of Fort George.

These efforts and others including the organization of an international day of action in April 1994 on HQ’s 50th birthday contributed to the 1994 decision by HQ to put the Great Whale project “on ice.” HQ has continued their lust to destroy rivers and Indigenous lands. The Northeast Megadam Resistance Alliance is carrying on this work, collaborating with Indigenous activists, leaders and communities across eastern Canada to stop HQ’s genocidal and ecocidal efforts.

This piece published today in the Bennington (VT) Banner outlines many of the reasons why hydro is neither clean nor green, and why supposedly “green” Vermont should not be claiming their massive imports of HQ power as climate friendly.

The true costs of Hydro Quebec

In 2010, Vermont lawmakers lifted the cap on hydropower and became one of the only states that allows utilities to meet their renewable energy requirements with electricity generated by large-scale hydropower. About 62 percent of the electricity we use here in Vermont now comes from hydropower and about half of that is from Hydro Quebec’s mega-dams.

While this energy is technically “renewable” in the sense that it relies on a fuel source that replenishes itself in a short time period, it definitely isn’t clean.

As the Vermont Climate Council formulates the climate action plan that will shape our state’s energy system going forward, it must assess the true environmental and humanitarian effects of large-scale hydropower and reconsider Vermont’s reliance on imported hydro.

Massive hydropower projects can have a very large carbon and methane footprint. Unlike many of the smaller run-of-the-river hydro projects located in Vermont, Hydro Quebec’s dams store and release water when power is needed. They often flood and drain hundreds of square miles of forested land to store and release the water that generates electricity. As trees and vegetation that usually sequester carbon decompose under water, their stored carbon is released — some as CO2, but mostly as methane. Methane, although not as long lasting as CO2, is a far more potent greenhouse gas.