The Right Rises Up as Latin American Left Faces Setbacks 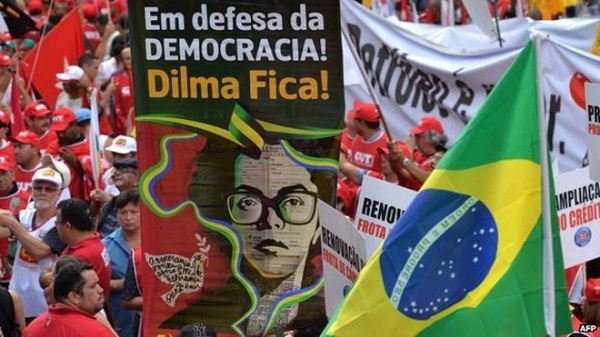 Photo: A poster at a pro-Rousseff march in Brazil reads: “In defense of democracy! Carry on, Dilma!”

Originally Published on Toward Freedom

Fidel Castro, in an address to the Cuban Communist Party congress yesterday, spoke of his own mortality, mentioning that soon he will be 90, “but the ideas of Cuban communism will endure.” Earlier this week, Brazilian president Dilma Rousseff was the victim of right wing parliamentary coup efforts; the left candidate in Peru’s election was recently voted off the ballot in the lead up to a June election, paving the way for the right wing Fujimori’s possible victory; Argentina is in the hands of Macri; and in many ways, Venezuela’s Maduro and Bolivia’s Morales are on the political defensive. Change is in the air.

The historic shifts in Cuba point toward a sea change in US relations with the island. Macri is showing how disastrously and quickly the gains of the Kirchner years can be turned back in Argentina. Most of Rousseff’s key enemies are embroiled in monumental corruption scandals of their own. The situations in Venezuela and Bolivia are hard to sum up, but I think one thing deserves mentioning as corruption scandals beset many leftist governments in the region: the entire premise of 1990s neoliberalism was corruption and a war on the poor. This doesn’t excuse today’s culprits in power, but it does point to a significant difference between the two eras in the scale of corruption and policy impact

What is next for the region could vary widely, but recent news, which could well be interpreted as the twilight of this wave of the Latin American left, really underlines how phenomenal this last stretch of history was — from the election of Hugo Chávez in 1998 to Evo Morales and the rise of a progressive regional bloc, and all the other people’s victories in between.

Ben Dangl is the editor of TowardFreedom.com.

← WATCH: New Music Video “Fabulous Bad Weather” from Rev. Billy and the Stop Shopping Choir!
Intrexon Stocks Fall – Exposed for Being a Sham of a Corporation →