The Rebel, Oronto Douglas: Memorial for a Friend

A memorial to Oronto Douglas republished with permission from OtherWorldsArePossible.org 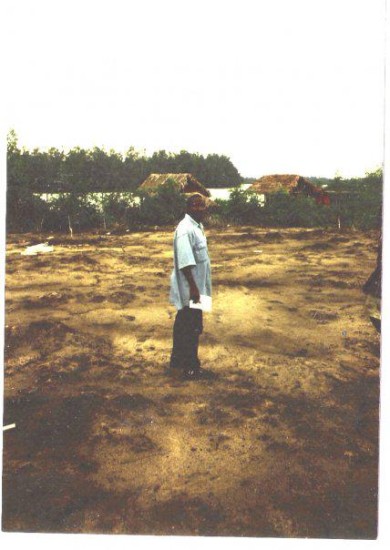 If they knew him at all, the world knew Nigerian Oronto Douglas as the former attorney for the writer, playwright and Ogoni human rights activist Ken Saro Wiwa. Despite Oronto’s and even President Bill Clinton’s best effort, Ken was framed and hanged in 1995 together with 8 other Ogoni men who dared resist Shell Oil’s drilling in their homeland under former dictator Sani Abacha. Or perhaps the world knew Oronto as a top advisor to the former president of Nigeria, Goodluck Jonathan.

To his friends, Oronto was so much more. He was a man of profound sacrifice, service, love, integrity, and faith. He was a true Christian, taking to heart the message of the rebel Jesus. Like Jesus, he was at his most fierce in taking on the money-lenders in the temple. Oronto’s “temple” was the natural world, and in particular, the lush and verdant landscape of the Niger Delta. In speeches and interviews, he took on the oil companies and their backers, repeatedly proclaiming, “They drill and they kill!” He urged people of conscience to divest from fossil fuel companies.

His fearlessness in the face of violence, torture and even threats of death meant that he carried the message against the planet-plunderering oil companies around the world, speaking truth to power, no matter the price.

I first met Oronto Douglas at the Kyoto international climate negotiations in 1997. We were on the same panel which Friends of the Earth had pulled together. As soon as he started to speak, the journalists – all of whom had been sleepily typing away at their computers – rushed to our corner of the hall, riveted by his powerful, personal story.

When I learned this brilliant orator had never been to America, I helped arrange for Oronto to come to the US.  I knew Americans needed to hear his message. We traveled together to Seattle, Portland, San Francisco, New York and Washington, DC. Again and again, tirelessly, passionately, he told of the occupation of the Niger Delta by oil companies, the colonialism that predated them, and his love of the Niger Delta and its peoples. At every location, when Oronto ended his speech with a call for divestment from oil and gas companies, I could predict just how many seconds would pass – three, exactly – before the audience would rise to its feet in a standing ovation.

Oronto came from a village in Bayelsa State where human rights were routinely violated, the earth was scorched in decades-old caked oil spills, the water was polluted, the air rained toxins from endless gas flares, and troops routinely gunned down or tortured those who protested.  Nevertheless, he quickly came to recognize that climate change and the oil companies operating in Nigeria were an even greater threat than the government itself – and not just to Nigeria, but to the entire planet. And so he and his fellow Ijaws, the largest ethnic nationality in the Niger Delta, determined in 1998 to usher in the New Year with “Operation Climate Change,” a maneuver which required the cooperation of all of the oil workers of the Niger Delta and thousands of protestors, to draw attention to the rights of the Ijaw to self-determination on their territory. Their declaration of independence was released in the now For a few days, he and his fellow activists and the oil workers managed to shut down all of the oil flow stations, shutting in over half of all of Nigeria’s oil production. As troops fired on demonstrators, his friends knew Oronto was a hunted man.

Try as we might to generate news coverage of the political motivations behind “Operation Climate Change” in the U.S. and the cause of the Ijaws, we failed. It was over the holidays between Christmas and New Year’s, and every journalist seemed to be on vacation or unwilling to cover such an obscure topic. Our fear was that Oronto and his comrades would be hunted down in the creeks where they were hiding and killed without any international press attention.  So a group of us decided we would raise the funds to take out a full page ad in one of Nigeria’s largest news dailies, with signatures from activists and world leaders, and the statement: “The World is Watching: Peace in the Niger Delta.”

It was on another of his trips to Washington, D.C., when we decided we needed to do more to elevate Oronto’s status in the international press, so we arranged for him to meet President Bill Clinton. Oronto was able to have a photograph of him shaking hands with Bill Clinton, which we immediately ensured was sent to the press in Nigeria, with the caption, “Oronto Douglas meets President Clinton.” We had determined the higher Oronto’s profile, the safer he would remain. Little did we know that, try as we might to protect him from an assassin’s bullet, it was the pollution–the drillers’ and spillers’ carcinogenic fossil fuels–that would end up killing him.

Oronto was compassionate, joyful, hard-working, tireless, determined to work for justice, environmental protection and peace. His spirit and example inspired me to take more risks, to be more fearless, to do more than I was doing to be of service.  He made a point of always lifting up those around him, no matter how heavy his sorrows and important his work.  He may be taking a call from the president of Nigeria, he still had the scars of torture on his back, but he made time for the smallest of concerns in his friend’s lives.  This was particularly the case if children were involved–he loved children and they loved him.

Oronto had a grand vision of a united Nigeria, one held together not by the outdated boundaries of colonialism nor torn apart by the dangerous animosities of tribal identities but by the agreement of a sovereign national conference.  I hope one day that dream of his becomes a reality. It is sorely needed, particularly as oil prices have fallen and the budget for Nigeria’s government, 80 percent of which comes from oil revenues, has dropped with it. In the interim, Oronto played a pivotal role in helping Nigerian elections become more free, transparent and fair, which became evident when President Goodluck Jonathan quickly ceded power to Muhammadu Buhari despite a close election.

I saw him on numerous visits to the US, always finding out about them at the last minute, days or maybe even hours before his arrival. Sometimes he was in the US meeting with the State Department. Other times he was getting treated for cancer.  Had I known that the last time I saw Oronto would be my last visit, I would have done more than just accompany him to see his doctor. If he had had the time or energy, I would have held a press conference and shouted to the rooftops: Here walks a modern day hero, a man who can show us the way back to the temple, a man who is far more powerful than the money lenders, the oil companies and the politicians, a man unafraid of the killers and the drillers. Here walks the one and only Oronto Natei Douglas! But, of course, he would have none of such fanfare.

To all of you who loved Oronto, and I know there are many, he was indeed our beloved Oronto, but he was also God’s beloved Oronto. And he is now most certainly in God’s embrace. May God bless his widow and his sons and lift them up at this most painful time, as Oronto did for all of us, and may his spirit and the supreme example of a life of service and love that he led live on in all of us. In Jesus’ name.  Amen.

Daphne Wysham is a Climate Policy Fellow with the Center for Sustainable Economy and an Associate Fellow of the Institute for Policy Studies.