The Imperative of a Constitution That Guarantees Human and Environmental Rights

Gary Graham Hughes has extensive experience on human rights and environmental issues throughout the Americas. He received a B.Sc. in Sociology from the University of Oregon, and a M.Sc. in the interdisciplinary Environmental Studies program at the University of Montana. Currently he works at the California Policy Monitor with Biofuelwatch.

One of the most important and complex demands of the current social mobilization that has irrefutably changed Chilean society forever is the demand for a new constitution to replace that established during the military dictatorship that devastated Chile for 17 years from 1973 – 1990. 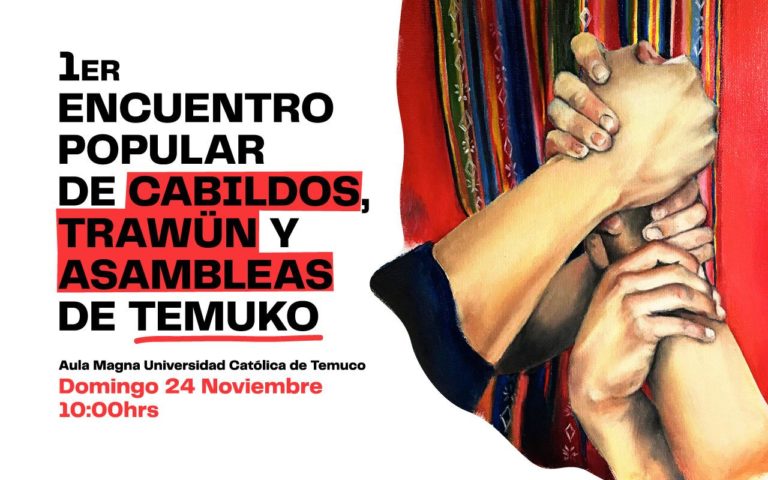 This discussion about the imperative of a new constitution reflects the sophistication of the politics that bubble beneath the surface of an intense and combative street protest movement and permeate all debate about how to achieve the profound structural changes that the protests are demanding. The classist and discriminatory constitution established under Pinochet is marked by the enshrining of private property rights, including over public trust resources like water, which is over all other considerations. For the Mapuche people of Chile, it was also marked by the theft of their lands, stolen and gifted to the timber industry for the establishment of industrial timber plantations. These plantations now dominate Mapuche lands, leaving communities impoverished and without fresh water.

This fundamental legal injustice of the Pinochet constitution in Chile is understood and rejected by the broad diversity of regular people, radical youth, labor unions, and the social, community and indigenous organizations mobilized for structural change. The imperative of a new constitution sharply outlines the political agenda of Chile’s unexpected and complicated social awakening.

Our Global Justice Ecology Project and Biofuelwatch delegation to Chile was lucky enough to get a direct view not only into the demands of civil society for a new constitution, but also into the sophistication and inclusiveness of the organizing process that the grassroots is developing to pursue the creation of a new guiding document for Chilean society.

After a Saturday evening arrival to Temuco, the Araucanía Region of Southern Chile, in the territory known to the indigenous Mapuche people as Wallmapu, we were able to attend and observe the first “Popular and Plurinational Meeting of Temuco” on Sunday. While this ‘asamblea’ was predominately Mapuche, it was an organic example of how Chileans throughout the country have begun to embark upon a process to literally decide how they will govern themselves. This larger gathering was a means of bringing together the multitudes of neighborhood and community level organizing that has already existed in Chile, and that has accelerated exponentially over the past weeks.

The principal objective of the Temuco asamblea was to identify commonly held political objectives arising from the current socio-political crisis. The day-long gathering included extensive work in discussion groups and a larger congregation that worked through the questions of the causes of the current political crisis, how a mobilized populace can participate in the politics of a nation, a detailed defining of the demands of the movement, and strategies for identifying and pursuing effective avenues for moving forward.

Even as participatory democracy can create a soupy mess of esoteric proposals and long afternoons of ensuring all voices are heard, the asamblea confirmed the values held in common in the diverse Chilean social movement. It is these common ideas and values that create the political space that allows for a process to establish a new constitution. First and foremost of those values is that any new constitution must prioritize guarantees to human and environmental rights.

One message was clear from the gathering in Temuco: to achieve those goals of a truly equitable and rights based society, the new constitution must be “plurinational.” That is, the new constitution must recognize and enshrine the multiplicity of cultures and peoples in the country called Chile. It must elevate indigenous peoples as the original sovereign inhabitants whose peoples indeed possess legitimate claims to the recovery of territory. Anything short of that will simply be insufficient for a mobilized social movement.

The political model cannot be simply reformed.  It must be transformed.

Check out the website (in Spanish) of the ‘asamblea plurinacional de Temuko.’ 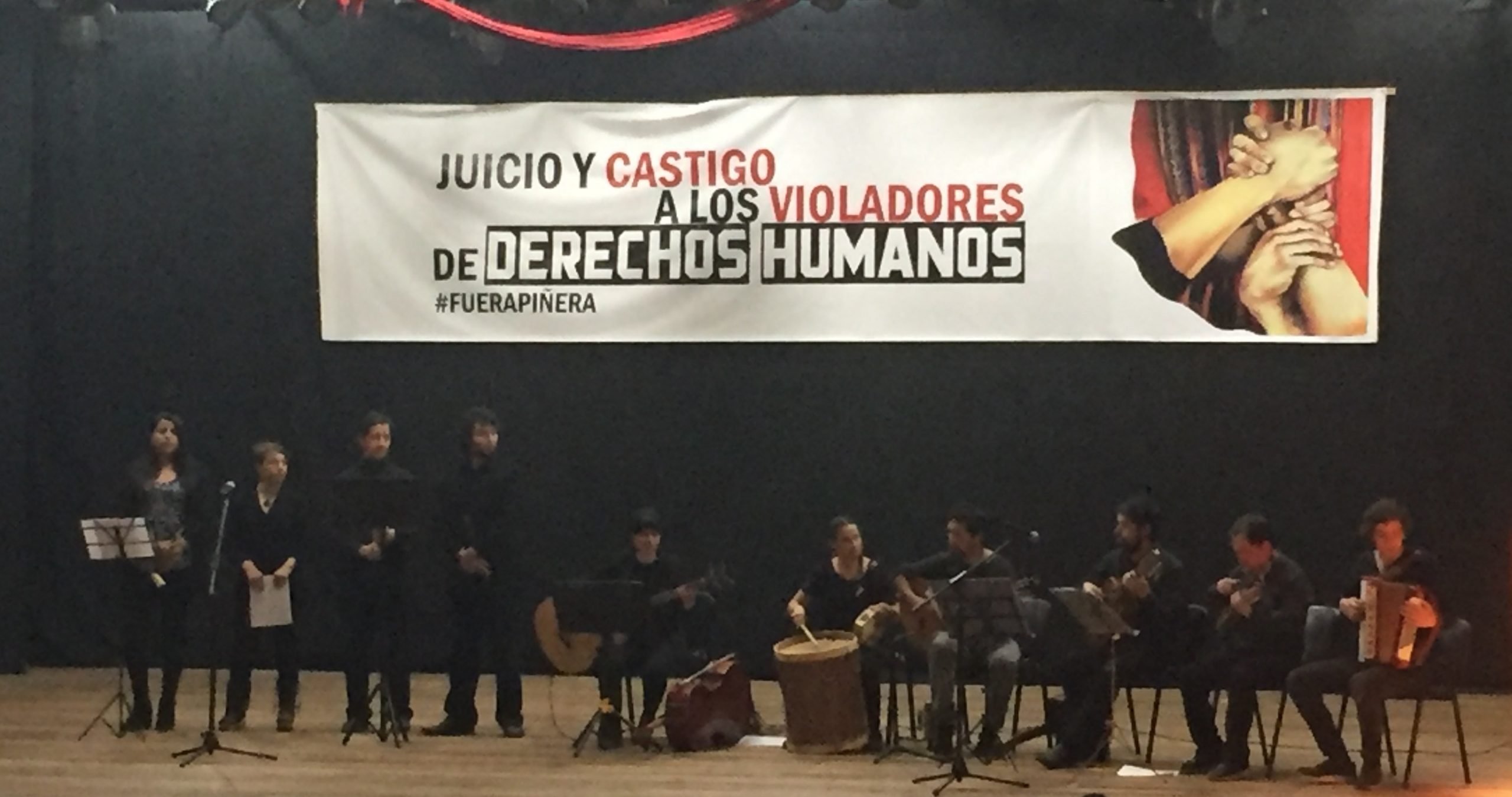 The ‘asamblea’ began with a short set of songs in the classic mix of Andean and Chilean folk styles. Photo: Hughes 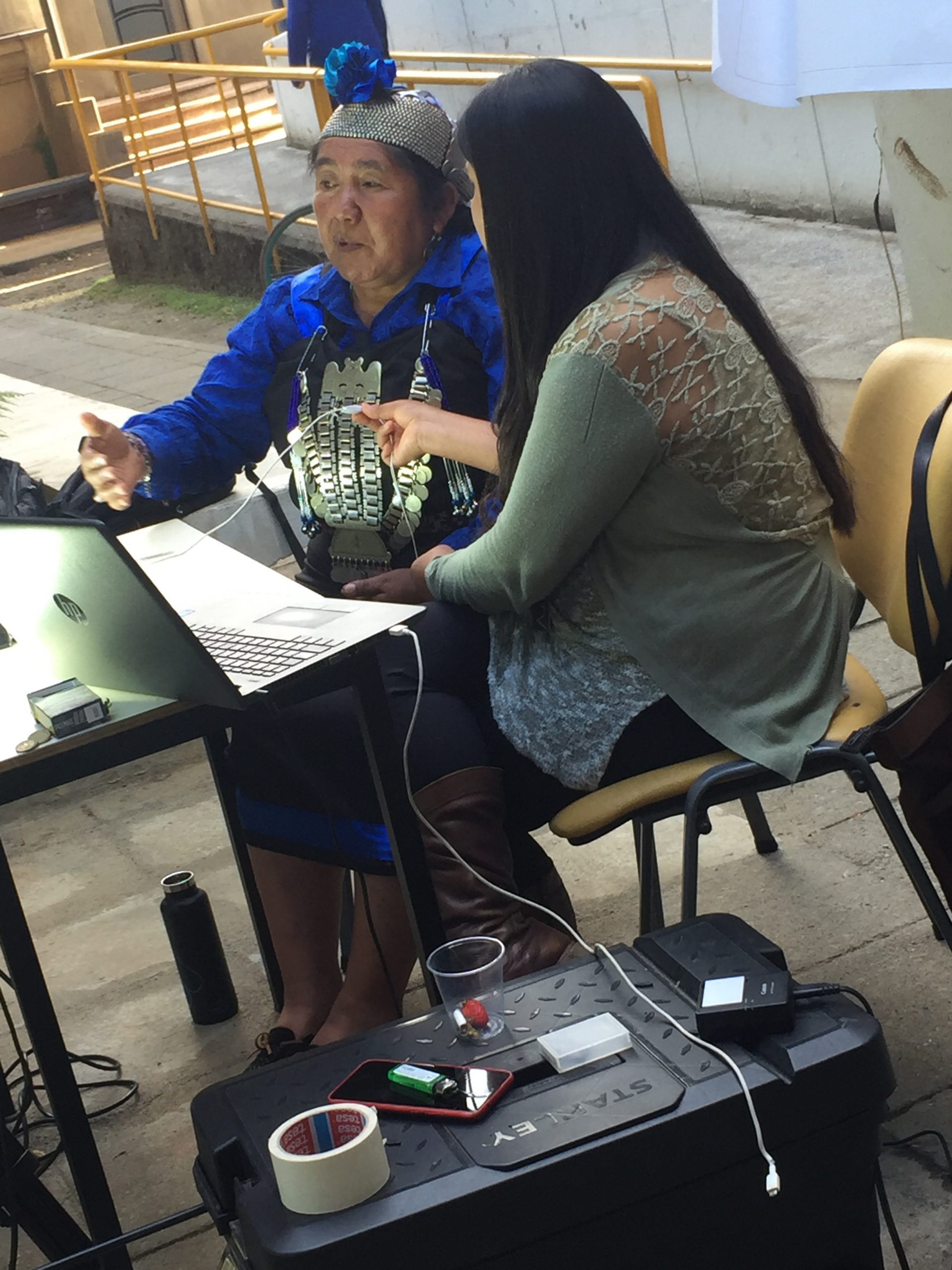 Mapuche community leader Ana Llao is interviewed as part of the communication strategies of the ‘asamblea.’ Photo: Hughes

The banner reads “Trial and Punishment for Human Rights Violations — Out with Piñera” and was prominently displayed through out the day. Photo: Hughes