In an attempt to highlight and bolster the “groundswell of resistance” against fracking wells, pipelines, and other fossil fuel projects throughout the United States, a coalition of environmental groups on Thursday launched the Fossil Fuel Resistance Mapping Project, which details precisely where opposition to Big Oil is taking hold throughout the United States and how others can join in.

“People demand a safe and clean environment, and they will not rest until that is guaranteed for every community across the country.”
—Kelly Martin, Sierra Club

“From the Gulf Coast where people are recovering from Hurricanes Harvey and Irma, to the Pacific Northwest where wildfires are raging, many communities are leading fights against fossil fuel projects amidst life-altering climate impacts,” the coalition—which includes 350.org, Sierra Club, and Bold Alliance—said in a joint statement Thursday.

“These fights are not isolated events, but rather a groundswell of steadfast and widespread local resistance to fossil fuel projects across the continent in the absence of federal climate action,” the groups continue. “Grassroots leaders in these efforts are pushing back on the fossil fuel industry’s injustices, from environmental racism to violating Indigenous sovereignty.” 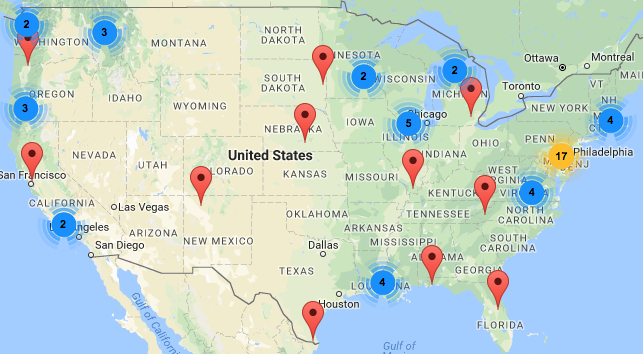 The groups hope that the map, which can be accessed on the coalition’s website, will serve as “a resource for people to find, start, or join a campaign in their community to resist fossil fuel projects, and for those involved in existing fights to connect with each other.”

They also believe the map will serve as a tool to raise awareness and concern about the risks those who live near oil refineries and pipelines face on a daily basis.

“With the climate-denying Trump administration putting the the health of Big Oil billionaires’ bottom lines before anyone else, the time to join your local fight to protect our air, water, and planet is right now.”

—Cherri Foytlin, Bold Louisiana “This map highlights what too many Americans are forced to grapple with everyday: a life, community, and clean water and air threatened by fossil fuel infrastructure,” Kelly Martin, director of Sierra Club’s Beyond Dirty Fuels project, said in a statement. “That’s why we’ve seen the movement to oppose these projects grow rapidly in recent years. People demand a safe and clean environment, and they will not rest until that is guaranteed for every community across the country.”

The new project comes as the Trump administration continues its efforts to empower the fossil fuel industry and roll back regulatory measures designed to protect the air and water—even in the aftermath of deadly hurricanes like Harvey and Irma, which have left millions exposed to dangerous pollutants.

Foytlin, executive director of Bold Louisiana, said that the Trump administration’s blatant and “reckless” contempt for the planet should serve as a potent motivator for people across the country to join the burgeoning opposition movement and fight back.

“The extractive industry is like a cancer, and our efforts to stop this industry’s expansion are holistically connected on many fronts—this map makes that clear,” Foytlin observed. “With the climate-denying Trump administration putting the the health of Big Oil billionaires’ bottom lines before anyone else, the time to join your local fight to protect our air, water, and planet is right now.