The Destruction Of Nature & Covid-19 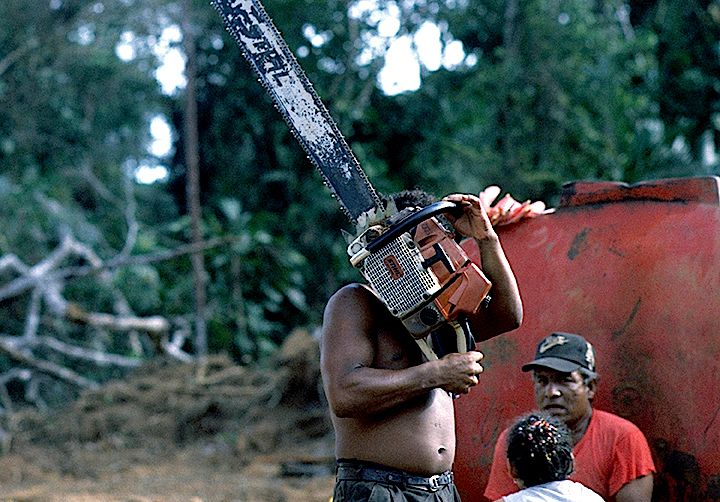 A logger (employed by a South Korean multinational corporation) with a chainsaw in the Bosawas rainforest; the Bosawas is the largest rainforest north of the Amazon Basin.  Illegal logging threatens the rainforest’s biodiversity and Indigenous Peoples.  (Nicaragua 1997) Photo: Orin Langelle/GJEP

‘Tip of the iceberg’: is our destruction of nature responsible for Covid-19?

Mayibout 2 is not a healthy place. The 150 or so people who live in the village, which sits on the south bank of the Ivindo River, deep in the great Minkebe Forest in northern Gabon, are used to occasional bouts of diseases such as malaria, dengue, yellow fever and sleeping sickness. Mostly they shrug them off.

But in January 1996, Ebola, a deadly virus then barely known to humans, unexpectedly spilled out of the forest in a wave of small epidemics. The disease killed 21 of 37 villagers who were reported to have been infected, including a number who had carried, skinned, chopped or eaten a chimpanzee from the nearby forest.

I travelled to Mayibout 2 in 2004 to investigate why deadly diseases new to humans were emerging from biodiversity “hotspots” such as tropical rainforests and bushmeat markets in African and Asian cities.

It took a day by canoe and then many hours along degraded forest logging roads, passing Baka villages and a small goldmine, to reach the village. There, I found traumatised people still fearful that the deadly virus, which kills up to 90% of the people it infects, would return.

Villagers told me how children had gone into the forest with dogs that had killed the chimp. They said that everyone who cooked or ate it got a terrible fever within a few hours. Some died immediately, while others were taken down the river to hospital. A few, like Nesto Bematsick, recovered. “We used to love the forest, now we fear it,” he told me. Many of Bematsick’s family members died.

Only a decade or two ago it was widely thought that tropical forests and intact natural environments teeming with exotic wildlife threatened humans by harbouring the viruses and pathogens that lead to new diseases in humans such as Ebola, HIV and dengue.