“Thanksgiving Day” in Mapuche Territory, Chile – Another Racist Attack by the State 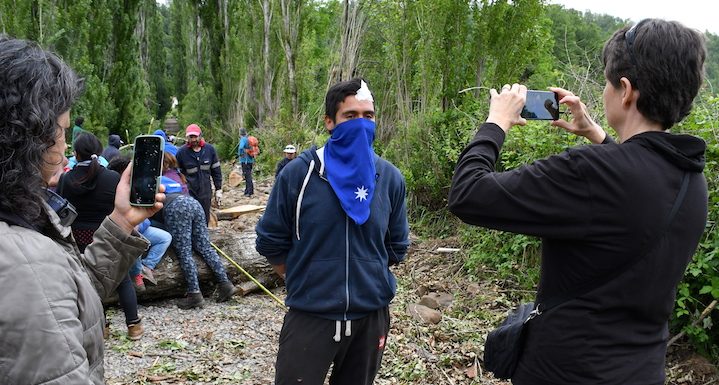 Near Curacautin, Wallmapu (28 November 2019) – On U.S. “Thanksgiving” Day (known now as the National Day of Mourning) Indigenous Mapuche in Chile occupying their ancestral lands in defiance of the state were attacked by Carabineros (Chile National police). In spite of this repression, they continue to stand up for their rights to land. This photo essay was shot during that day.

Below the photo essay is a brief video interview with a young Mapuche man who speaks about the invasion and his injury in the attack by the Carabineros.  Under the video is the translation of his comments.

All photos by Orin Langelle and video by Anne Petermann.

With the momentum of the national uprising across Chile, two weeks ago, two Mapuche communities near Curacautin, Liempi Colipi and Quilape Lopez began an occupation of 1500 hectares of ancestral lands.

Carabineros illegally stop and prevent traffic from continuing on the road that passes the two Mapuche land occupations outside of Curacautin.

The public road is also the main route to Conguillio National Park in Chile.

After an emergency call from the Mapuche occupation about the Carabineros attacking, we were stopped by them at a road block on our way back to help. Alejandra Parra from Red de Acción por los Derechos Ambientales (RADA) and Anne Petermann from Global Justice Ecology Project (GJEP) were allowed to proceed on foot several kilometers to the blockade while Biofuelwatch’s Gary Hughes and GJEP’s Orin Langelle were guided by Mapuche to the blockade via a back road.

Mapuche men guarding another back entrance into the blockade.

Mapuche put cut trees and debris on the road.

These logs block the road coming from Curacautin.

At one of the entrances to the occupation.

Mapuches going into the main entrance where the shootings occurred earlier that day.

One of the men shot earlier that morning returns to camp and is videoed by Anne Petermann and Alejandra Parra.

The man was shot in the head with metal-filled rubber pellets by the Carabineros earlier in the morning.

Mapuche Lonko Juan Huenuhueque of Liempi Colipi raises his fist as the imminent threat fades of the Carabineros coming to evict the Mapuche communities from their ancestral lands.

“We want to make a public statement to the Chilean territory, to Mapuche people, to the whole country, to inform about this situation where riot policemen have done things here in the Liempi Colipi community, in the district of Curacautín, La Araucanía region. They have entered the community today-the riot policemen-without any previous dialogue, any eviction order. When we reached them to have a conversation, they started shooting tear gas canisters. They started shooting at us, and the one of them hit me was fired no more than fifteen meters away from me. So, we make a public statement for you to be aware of this. There are more injured peñis, on their arms, on their stomach, in their tummy. So, we encourage you to pay attention to this, to be prepared because the riot police officers are coming after us again. Marichiweu! (We shall win a hundred times in Mapudungun)”