With TV billionaire Donald Trump now officially sworn in as the leader of the free world, we are reminded of the statement GJEP released after his election in November.

Donald Trump and the new Republican held Congress will be nasty. There is no question about that.

But the one possible positive outcome of this spectacular disaster is that there is no such thing as complacency any more. You either organize or you let Trump’s agenda of hate run rampant. There have been galvanizing moments in United States history when injustice was so potent, so undeniable that people came out in droves to be part of the force for change. I believe this can become one of those moments.

There is no political party that will do this for us. It is up to us. It is time to acknowledge that the system doesn’t work and start talking about what we do next. Time to mobilize. Time to take action for real systemic change.

That is our commitment here at Global Justice Ecology Project.  GJEP was founded to address the intertwined root causes of social injustice, economic domination and ecological destruction.  That is our mission. And we will keep organizing and building to strengthen the global movement toward the fundamental, transformational, bottom up change necessary to achieve a sane future on this planet.

Today, the Institute for Public Accuracy 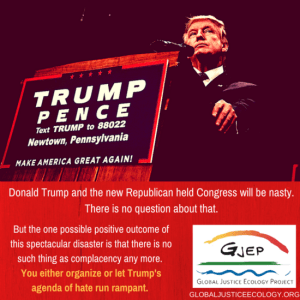 provides the following ‘Field Guide to Trump’s Swamp’ to help understand what the United States could be in for thanks to Donald Trump’s cabinet and political allies.

Wedel, an anthropologist, is a University Professor in the School of Policy, Government, and International Affairs at George Mason University. She just wrote the piece “A Field Guide to Trump’s Swamp.” Her books include Unaccountable: How The Establishment Corrupted our Finances, Freedom, and Politics and Created an Outsider Class and Shadow Elite: How the World’s New Power Brokers Undermine Democracy, Government, and the Free Market.

Wedel writes: “[Trump’s cabinet, a] collection of primarily white men includes the wealthiest Cabinet members in U.S. history, chosen by the man who will be the wealthiest president ever. Many of them are slated to take charge of missions and bureaucracies they have vowed to thwart or even eliminate. And the vast majority of this homogenous group exhibit some form of conflict of interest, just like their chieftan, who, indications are, may take conflicts of interest to an unprecedented level for a U.S. president. Trump busts presidential norms not only in his own personal conduct, but also in the number of conflicted players surrounding him—and in the magnitude of their conflicts. …

“But perhaps an even bigger concern are some of Trump’s other picks, advisers, and associates who qualify as ‘shadow lobbyists.’” To name a few: