Sympathy for the Devil: Thoughts on the New Nomination to Lead the World Bank 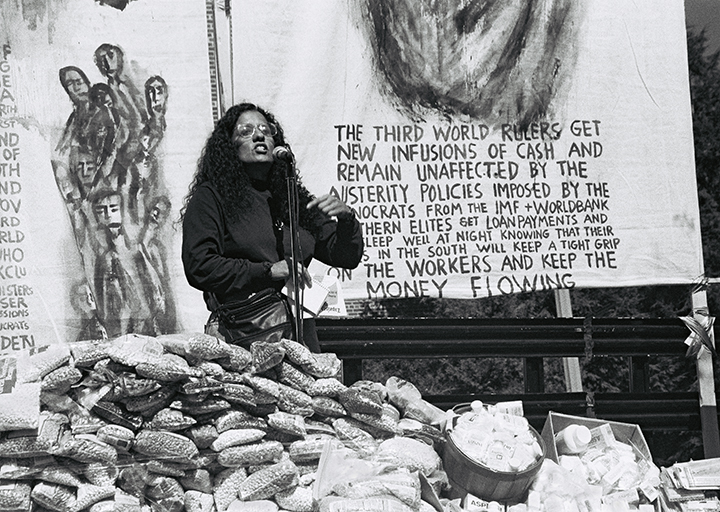 A personal reflection on the World Bank, Jim Kim, and David Malpass

Soren Ambrose is a member of the Board of Directors of Global Justice Ecology Project.  He is based in Nairobi, Kenya and works for ActionAid International.  He was previously part of the leadership of the 50 Years is Enough Network, which analyzed and organized against World Bank injustices.

I had met Kim back in 1995 at a protest against the IMF and World Bank in Washington, DC. It was no more than a handshake, but I was thrilled to meet the lead editor of Dying for Growth, a remarkable compendium of articles about the disastrous impact of IMF/WB policies on health around the world. It was one of the pillars of the multi-sectoral work I did with the 50 Years Is Enough U.S. Network of IMF/WB critics.

He had left Partners in Health well before his nomination and gone on to other, less movement-friendly positions, such as the presidency of Dartmouth College. But still, he was Jim Kim; he at least had been “one of us.” What was I, a dedicated campaigner against the U.S. monopoly on the WB presidency, to do?

I didn’t support the U.S. nomination of course, but I wasn’t so passionate in opposing it as I might otherwise have been. Less sentimental colleagues led the charge. But now that Kim has left, we know that he will be remembered primarily for turning the Bank into an even bigger booster of private-sector domination of development than it already was. So much so that he decided to bail on the job when Trump could nominate his replacement, apparently to get the obscene payoffs that await investment bankers with insider experience. Not exactly what I had been hoping for.

So now that Trump has made his nomination, why do I find it difficult, again, to be as passionate as my colleagues in opposing the pick?

Trump of course has made a habit of appointing top officials who oppose the mission of the agency they’re supposed to lead. The U.S. Secretary of Education holds public education in contempt; the head of the Environmental Protection Agency prefers corporate indulgence to clean air or action on climate change, and so on and on and on. It’s been a massacre.

But I wasn’t too upset to see headlines like Vox’s “Trump’s World-Bank hating pick for World Bank president.” I like public education and clean air, but I can’t really claim to like the World Bank so much. I would be dubious about any nominee who thought it was doing a bang-up job. So … why does David Malpass “hate” the World Bank?

Well, Vox says, he failed to predict the global financial crisis that got underway in 2008. So did the IMF and World Bank. So did almost every mainstream economist around the world. We could insist the nomination go to a more prescient person, such as Dean Baker, but somehow I doubt he’d accept … or that he’d get nominated. Of course Malpass failed in a pretty spectacular way, as chief economist at investment bank Bear Stearns, the first big casualty of the crisis, but that just gives us a reliable laugh line when we criticize him.

Malpass thinks well-off countries are getting too much of the World Bank’s attention:

“The World Bank’s biggest borrower is China. Well, China has plenty of resources,” he said at a Council on Foreign Relations forum in November 2017. “And it doesn’t make sense to have money borrowed in the US, using the US government guarantee, going into lending in China for a country that’s got other resources and access to capital markets. … So one of the things we’ve challenged the World Bank to do is graduate countries, that as they are successful, let’s reduce the lending there and allow more lending to countries that need it.”

A multilateral financial institution should be devoting its public resources to the countries that won’t develop otherwise, shouldn’t it? Why should public money support projects in a country that is lending billions to other governments? Maybe focus more on the IDA countries for a change (not that I think all IDA programs are great …).

Malpass thinks the Bank spends too much on salaries – which, although Voxneglects to mention it, are tax-free since the Bank is considered a “treaty organization” under U.S. law. Vox’s Dylan Matthews is worried that declining to match salaries like those at Goldman Sachs will mean the Bank loses out on qualified staff. I’d say staff that would prefer to be at Goldman Sachs shouldn’t be working at a public development institution.

In November 2017, speaking before the House Financial Services committee, he was even harsher, indicting the World Bank and other multinational financial organizations for their policy advice, which is increasingly the main product offered by the World Bank, rather than direct loans.

Unfortunately he doesn’t tell us what policy advice Malpass didn’t like, but given that civil society has been battling the World Bank’s addiction to neoliberal policies in every conceivable sector, I wouldn’t mind if a new president had a skeptical attitude toward them, even if it doesn’t necessarily agree with our take.

“They’re often corrupt in their lending practices, and they don’t get the benefit to the actual people in the countries,” he told then-ranking committee member Maxine Waters (D-CA). “They get the benefit to the people who fly in on a first-class airplane ticket to give advice to the government officials in the country, that flow of money is large, but not so much the actual benefit to normal people within poor countries.”

I’m not saying that I would actually support David Malpass to become World Bank president. I would never support any U.S. nominee, much less a Trump nominee who shares some of Trump’s world-view. But given the kind of buffoons Trump has appointed to many positions, this nomination could have been much worse. A Bank president who is critical of the Bank, critical of international-development-business-as-usual, and apparently not stupid about it, would not be a bad thing. But of course things don’t always turn out the way we expect.

I am growing impatient for some developing country to nominate an alternative. I’d like a reason to be enthusiastically opposed to the U.S. candidate.