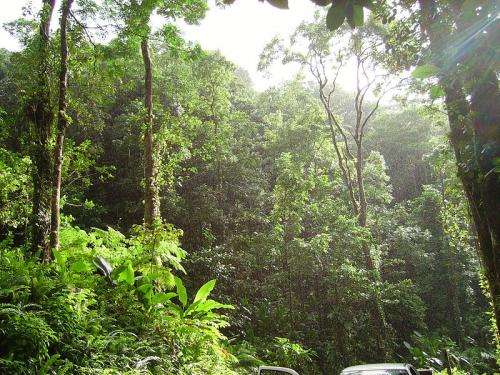 Phys.org reports that a small team of researchers from Mexico and the U.S. have found that protecting the remaining parts of the rain forest will require more than simply outlawing intrusion by mining or tree-cutting on islands of land.

In their paper published in Proceedings of the National Academy of Sciences, the group outlines the problems isolated patches of protected rain forests encounter and why those problem needs to be fixed or we risk losing what we are trying to protect.

In looking at data representing forty years of study of Los Tuxtlas, a 700 acre reserve near the Gulf Coast in Mexico, the researchers have found that merely stopping logging is not enough to protect parts of the rain forest. They found that creating islands of protected forest land leads to two problems that together could spell doom for the land that is supposed to be preserved.

When all of the land around a reserve is cut down, the team explains, edge effects occur that cause gaps to appear around the periphery—those gaps allow in more sunlight in the understory, which helps young palm trees to take hold and eventually take over. Concurrently, cutting down all of the adjacent forest leads to a reduction in the number of animals that are able to live on the reserve. That reduction in animals, which mostly feed on vegetation, allows young palms to grow unfettered, which in turn leads to them encroaching ever further into the protected forest. Eventually, the researchers report, biodiversity in the protected forest will decrease to the point that it will consist mostly of palms and other small vegetation that can exist alongside of it, as most other vegetation will be pushed out, leaving a nearly otherwise barren environment.

Read the full article at Phys.org.