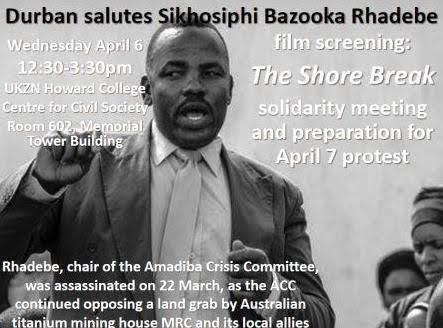 Update From The Amadiba Crisis Committee:
Three thousand wanted to pay respect to our Bazooka Radebe at his funeral in Mdatya, 1500 sitting for 8 hours, the rest standing, coming and going. 30 civil society organisations were present solidarity from all over the country. They were all ready to speak against the injustice and violence caused by the mining application. Speeches of the Inyanda land rights movement and other social movements, Bishop Jo Seoka and Amcu President Joseph Mathunjwa were warmly applauded. In the presence of the AmaMpondo Queen and the Crown Princess Wesizwe, the Mbizana municipality delegation stood up and left when the royal spokesperson from Quakeni, explained why both MRC’s mining application and the coastal N2 Toll Road must be stopped and the will of the coastal Amadiba community respected and followed.

We also want to add information the report in The Citizen about the attack on journalists and locals that took place 17.30. http://www.citizen.co.za/1059659/bazooka-funeral-mob-attacks-journalists-anti-mining-activists/

Let us first inform that the SAPS broke a promise made to us and our legal team of tight security and cooperation with ACC marshals. There was not one uniformed police at the venue when the program started 9.30 with over 2000 present. The funeral was boycotted! By 11 a.m., our lawyers called to a police captain in Mbizana and got an apology. At about 14.00 two vans appeared from Mzamba police station with some eight officers.

At about 5.30 p.m., two journalists from The Citizen and two ACC members were viciously attacked on the road just outside Zamile Qunya’s family homestead. The journalists were guided by the locals to the red dunes. They wanted to take pictures of the Kwanyana block. People came out from the house armed with spears, pangas and knobkerries. The attack started with a robbery of camera, two cell phones and a note book. When the group found Nonhle Mbuthuma’s name in the note book the beating started.

Three Mpisi police officers came and asked the group to stop but they did nothing. The beating of the two on the ground did not stop until officers from Mzamba and leaders from ACC arrived. The Mpisi police then put two journalists and the local from ACC in the same double cab police bakkie as three attackers. The attackers were there to “help the police”, follow to the station and press charges against the journalists! The seriously injured crisis committee member was placed in the open at the back, bleeding heavily from stab wounds from a spear. A police sat into the journalists’ car aiming to confiscate it too! 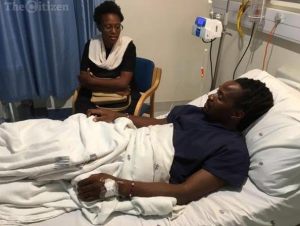 After violent discussions, the Mpisi police had to stop the nonsense, let the wounded be rushed to hospital and release the car. The disappointed attackers shouted “There is Nonhle Mbuthuma, kill her! Kill her!”

The journalist’s camera, the cell phones and the note book remain illegally confiscated by the police.

Two weeks ago Mbuthuma guided journalists from eNCA on the same public road. Three hours later, Mpisi station commander Ntlangula called her, ordering her to the Mpisi station next day, saying that “there were complaints”. When called by our lawyers, Mr Ntlangula could not explain what crime Mbuthuma was to be charged for. He said he only had invited her. She declined the invitation. Obviously, Mr Ntlangula had learned nothing from this.

Mr Zamile Qunya told eNCA on Saturday that neither he and nor anyone related to him have anything to do with one year of the increasing violence and threats in the community. His nephew Mr Ntethelelo Madikizela led the attack on Saturday, in which Mr Madikizela’s wife, Qunya’s mother and Qunya’s older sister participated. Other individuals are also identified and charges were laid during the night at the Margate police station.

Zamile Qunya is a director of the Australian MRC’s mine at Tormin north of Cape Town. He led the shootings in Xolobeni 3 May last year when a bullet from his pistol grazed the head of a man. Mr Madikezela was also a part of that attack last year.

The case is now by the Mzamba police. Unfortunately, the investigating officer from Mzamba is also a witness to the murder threats. Our lawyers are concerned that there will be no investigation and no measures taken whatsoever. There are so far no arrests of the attackers.  This is the routine in our community’s struggle. Also the Mzamba police seems to beliveve that they can keep the journalists property and material confiscated.

The journalist and our member remain admitted at the hospitals in Margate and Port Shepstone.