Posted on December 7, 2020 by Anne Petermann 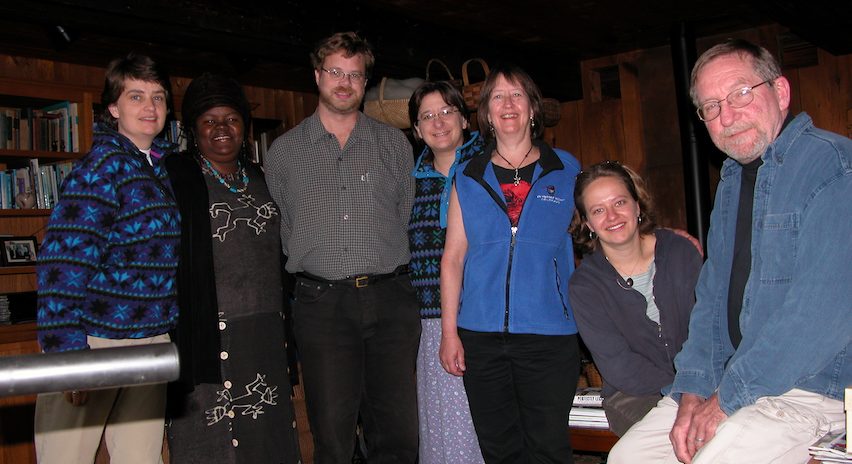 We at GJEP are deeply grieved to announce the passing of Soren Ambrose from complications of COVID.  Soren, a wonderful friend, outstanding organizer and powerful enemy of the ruling elite, was also a founding board member of GJEP and helped the organization navigate the waters of social and ecological justice work for the past 17 years.

Soren formerly worked with the 50 Years is Enough Network and was a leading organizer and strategist for the anti-corporate globalization movement of the early 2000s, especially A16, the April 16, 2000 shutdown of Washington, DC during the annual meetings of the World Bank. This protest was the first major protest since the shutdown of the World Trade Organization (WTO) meetings in Seattle on November 30, 1999.

GJEP co-founder Orin Langelle met Soren through his work in Central America in the latter 1990s.  Prior to Soren joining the Board of GJEP, Orin served on the Board of the 50 Years is Enough Network. About Soren’s passing, Orin writes,

We miss him. Even though he was on the other side of the planet, his presence was always felt.
Besides being a good friend, he was an important voice on our board calls, his experience and deep wisdom offering so much to our conversations and decisions.

The board and staff of Global Justice Ecology Project send our heartfelt condolences to his wife Njoki Njehu and his mother and father in Chicago.

From a post by Soren’s closest friends and family:

Our beloved Christopher Soren Ambrose, 57, died in the early hours of Saturday, December 5, 2020 at Aga Khan University Hospital in Nairobi, Kenya while undergoing treatment.
Soren is survived by his loving parents, Larry and Karen Ambrose of Chicago, Illinois (USA), who are heart-broken by the loss of their only child. He is also survived by his devoted wife, Njoki Njoroge Njehu of Nairobi. He will be missed by hordes of family members friends, and colleagues around the world. Soren had an enduring love for family and a strong connection with young children – his nieces and nephews adored him and are bereft by his death.
Soren bravely and defiantly battled colon cancer since August 2017. He is remembered by family, friends, and colleagues for his dry wit and sharp sense of humor which often had his wife begging people not to encourage him by laughing.
Soren was a lifelong activist, with an early start in the effort to save the seals with Greenpeace and protesting Norway’s whaling practices in the 1970s; he accompanied his dad, uncle, and grandfather who had gone to welcome the King of Norway to Chicago. They lost Soren for a while because he had wandered off across the road to join the protestors. His first trip to Africa was to Nigeria where he was hosted by environmental activist and writer Ken Saro-Wiwa. The plight of the Ogoni people and learning about Structural Adjustment Programs outraged him and changed the course of his life. He made the decision to leave the academy and abandoned his PHD dissertation in English to become an activist with the Chicago 50 Years is Enough Campaign. This momentous decision led to him and Njoki to meet in Washington, DC at a Steering Committee of the 50 Years Is Enough Campaign in January 1996.
Soren’s love for Njoki was evident to all who knew him – he always spoke of her with fondness and obvious admiration.
Soren’s activism saw him work for many great organizations, on life defining issues, and took him to over 50 countries. He may have started his life in the army base at Fort Dix, New Jersey (USA), but he finished as a true global citizen – even though Kenya denied him his constitutional right to citizenship by his marriage of 24 Years and 5 days.
His biting humor cleverly and easily obscured a sharp analytical mind, a tender, sensitive, caring guy whose deep and enduring commitment to the struggles for justice, peace, and dignity was unwavering. He was easily outraged by injustice and had a strong sense of solidarity with those suffering unjustly. He would be quite embarrassed by the outpouring of affection and loving tributes from so many people from throughout his life. Soren was generous with his time, freely giving of his many skills, and set high standards for himself – expecting perfection in everything he did, but being forgiving of others.
After his marriage to Njoki, Soren gained a large extended Kenyan family and was often irked by the many shared names, as well as multiple names used to refer to the same person. This from the same guy who was known as Chris until he was 11 before switching to Soren, huh? The irony of his complaint was not lost on him.

Here is one of Soren’s last pieces of writing:

In the midst of the pandemic, why is the IMF still pushing austerity on the Global South?

Despite its own warnings, the International Monetary Fund is risking another ‘lost decade’ for development.