Sign On to Stop the Unregulated Release of Genetically Engineered Trees into Forests! 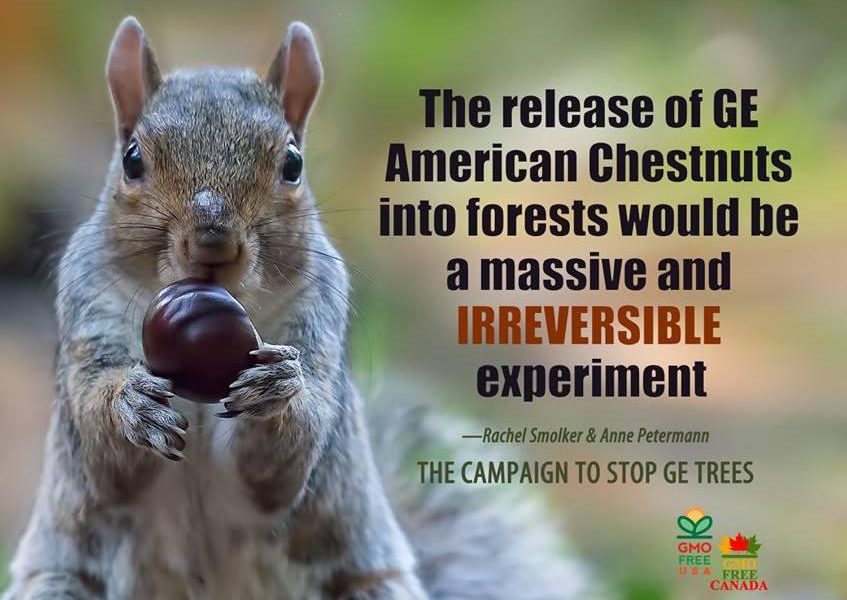 Sign on by clicking here or go to form below

You can find detailed information about these threats in the white paper Biotechnology for Forest Health? The Test Case of the Genetically Engineered American Chestnut

Researchers are developing a genetically engineered (GE) American chestnut tree and hope to win government approval to plant it throughout the forests of the Eastern US where the trees could spread their GE pollen and seeds freely. There would be no regulations on these trees nor any requirement to monitor them.

This would be a massive and irreversible experiment with our forests. It is completely unprecedented anywhere in the world. Never before has a GMO plant, especially a forest tree, been developed specifically to be released into wild nature to spread unchecked.

We need you to sign on to help us stop it before it is too late.

The unprecedented approval of these GE trees could open the floodgates to approval of other GE trees developed for industrial tree plantations. GE trees like poplar, pine and eucalyptus are being developed solely for their increased economic value as a source for commercial production of timber, pulp and biofuels. These GE tree plantations would take over huge areas of land – land where forests currently grow.

Why the rush? What if these GE American chestnut trees don’t work? Researchers have revealed that this genetic change may not be successful in restoring American chestnut trees – that they will need to “stack” more untried and untested genes into the trees – which means yet more things that can go wrong. More damaging impacts to the forest ecosystem.

Given the long lifespan of American chestnut trees (potentially over 200 years), the fact that scientists have minimal knowledge about highly complex forest ecosystems, and the unpredictable future impacts of climate change, real, meaningful risk assessments are impossible.

There is no way to predict the impacts GE American chestnut trees will have on forests, wildlife, songbirds, soils or nearby communities.

In fact, the U.S. regulatory system has no specific regulations to deal with the release of GE trees into forests. They don’t even know what questions to ask. Yet, even in the face of all of this, the researchers are rushing to win government approval for their GE trees.

Who is behind this? A close look at who is promoting the GE American chestnut reveals links to corporations that have provided financial and technical support to the research effort: companies including tree biotechnology company ArborGen, and biotechnology giant Monsanto (now Bayer) that stand to benefit economically from the deregulation of the GE American chestnut.

Forests are already threatened by unsustainable logging practices, invasive species and introduced pests and pathogens, urban sprawl, and the escalating impacts of climate change. We must solve the underlying causes of forest demise, not develop risky and unproven genetically engineered trees!

Any request to allow the unregulated release of GE American chestnut trees (or ANY GE trees) into forests must be rejected.

← MEDIA ALERT- May 14 Telepress Conf; Who is behind push for GE chestnut trees & why it matters
Call to Action for North American Forest & Climate Movement! →