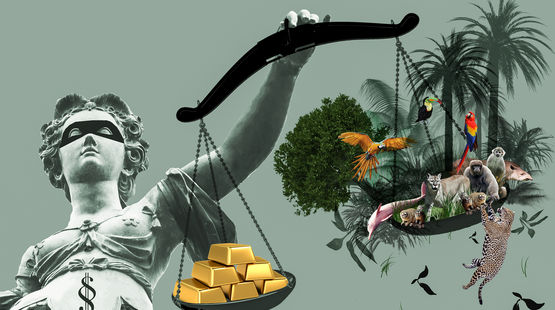 Two North American companies want to dig for gold in a national park in Colombia’s Amazonas Department. The miners are using the free trade agreement between Colombia and the U.S. to sue the country for $16.5 billion and bring the Colombian government to its knees. It’s a foretaste of what we can expect under TPP and TTIP.

In the late 2000s, the Canadian mining company Cosigo Resources informed the inhabitants of the protected area of its plans to prospect for gold there. Cosigo representatives visited the indigenous people in their homes and offered them money in exchange for permitting the prospecting, the organization Intercontinental Cry reports.

The leaders rejected the offer and held a meeting of their association, the ACIYA (Asociación de Capitanes Indígenas del Yaigojé Apaporis). To prevent the authorities from granting the mining concessions, they called on the Colombian government to establish a national park on their ancestral land. Colombian law generally prohibits mining in national parks.

Following consultations with the inhabitants, Yaigojé Apaporis National Park was officially created by the government on October 27, 2009. Two days later, however, the state geological service INGEOMINAS issued Cosigo a gold mining license. In 2011, the General Prosecutor’s Office demanded that the mining concessions for the national park be annulled. In 2013, the National Mining Agency declared Cosigo’s mining license to be expired and suspended the mining concessions.

Cosigo representatives are alleged to have talked a number of residents into forming a new indigenous association, ACITAVA (Asociación de Comunidades Indígenas Taraira Vaupés), reports Prensa Rural. The leader of the group, former police officer and settler Benigno Perilla, filed an injunction (tutela) to cancel the region’s national park status. His flimsy argument, as reported by the magazine Semana (in Spanish), was that not all of the indigenous people had been consulted before the national park was established in 2009.

Perilla had to admit to the judges of the Constitutional Court, who had traveled to the national park for a hearing of the residents, that Cosigo Resources had initiated, organized and paid for the campaign, writes El Espectador (in Spanish) and the organization Intercontinental Cry. The indigenous people led by Perilla subsequently declared that they had been deceived and that they supported the national park.

On August 31, 2015, the Constitutional Court finally rejected the injunction (in Spanish). It confirmed that the national park had been established in a lawful manner and called for all mining activities to cease. Regarding the relationship of Cosigo Resources to the indigenous people, the judges called on the relevant authorities to consider legal action against the mining company.

Miners file for arbitration in Texas

On February 19, 2016, Cosigo Resources and Tobie Mining and Energy filed a formal complaint against the Colombian government with the American Arbitration Association (AAA) in Houston, Texas under Article 3 of the United Nations Commission on International Trade Law (UNCITRAL). The mining companies are thereby invoking Article 16.10 of the Free Trade Agreement between the United States and Colombia.

In the complaint, they cite the association of Taraira and Vaupés indigenous communities (ACITAVA), whose demands had previously been rejected by the Constitutional Court. The companies even admit that support for mining was subject to strong disagreement among the indigenous communities.

According to the mining companies, the Colombian state had conducted numerous geological studies in the 1980s around the city of Taraira near the Brazilian border. The studies had confirmed significant gold deposits: South Taraira in particular had gold worth at least $16.5 billion. Following discussions with the indigenous communities of the area, it was agreed that ACITAVA would be given a 20% stake in the mining concession. The complaint argues that establishing the Yaigojé Apaporis National Park over the South Taraira mining concession amounts to a fraudulent, uncompensated expropriation.

The NGO Yes to Life No to Mining notes that the companies’ claim is questionable, however. It is not clear how a Canadian company can sue under the Free Trade Agreement of the United States and Colombia. Furthermore, the company cites UNICITRAL, the international trade law of the United Nations, which prescribes the World Bank’s International Centre for Settlement of Investment Disputes (ICSID) in Washington DC as the sole venue for such cases. The arbitrator and law firm selected by the company have not been involved in investor-state dispute settlements in the past.

Environment Minister Luz Helena Sarmiento noted that it would be a very serious matter if an individual interest were to bring down the existence of a national park.

Colombia is facing further suits before dispute settlement panels in the United States and Canada. A Canadian gold company, Eco Oro Minerals, notified the Colombian government of a dispute under the Free Trade Agreement between Canada and Colombia on March 7, 2016. Here again, the object of the dispute is a gold mining concession, the Angostura project, which is located in a water protection area in the High Andes, the Páramo Santurbán. On February 8, 2016, the Colombian Constitutional Court ruled that mining is prohibited in the Páramos water protection areas.

At least 30 other Colombian protected areas overlap with existing mining concessions, note Semana and El Espectador (both in Spanish).