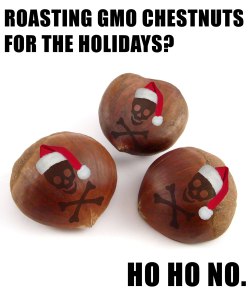 In a society rising up against the corporate capture of our food supply in the form of GMOs, a new untested and not-yet-approved GMO food is being promoted: the GMO chestnut.

An op-ed in the Washington Post, however, makes the silly assertion that this emerging new GMO food will be the answer to hunger and a step toward reconnecting with our food supply. The author of the op ed writes:

Repopulating our woods — and even our yards, our commons and our courthouse lawns — with [GE] American chestnuts would put a versatile, nutritious, easily harvested food source within reach of just about everyone. For those living on the margins, it could be a very real hedge against want. For everyone, it could be a hedge against distancing ourselves from our food, which can be the first step toward a diet low in the whole foods that virtually every public health authority tells us we should eat more of.

Really?  A food source for the poor?  People are going to be heading out with their burlap sacks collecting GMO chestnuts to roast, grind into flour or boil into candy?  This is the answer to hunger?  And what is the health impact of eating GMO chestnuts?  Has this been assessed?  No.

The scientists developing the GMO chestnuts argue that they have been modified only with the insertion of a single wheat gene, so what can possibly be the harm?  We eat wheat, right?  But as any ecologist, or thinking geneticist knows, genes outside of the genome in which they evolved can do highly unpredictable things.  And the genome into which they are inserted is damaged in the process resulting in mutations.  These mutations in turn lead to unanticipated consequences.  So no, just because it is a single gene from wheat, it is not inherently safe.

See the rest of Anne’s essay on GMO chestnuts at the Climate Connections blog!