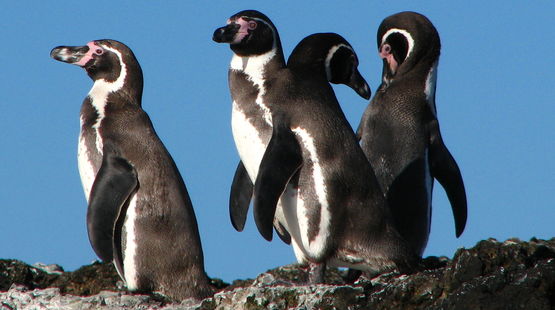 Chile wants to build two industrial ports in the habitat of the Humboldt penguin, endangering 13,000 breeding pairs of this vulnerable species. The first planned port has already been approved by the authorities. Local environmentalists fighting the project need international support: please sign our petition to have it scrapped.

Follow this link to sign a petition to save the 26,000 Humboldt penguins, and read on the La Higuera-Chañaral Island Declaration, which advocates for biodiversity in the region.

La Serena, 25. January 2016 Through great concern for the biodiversity of the coastal region of La Higuera/Chañaral Island, and the wellbeing of the residents of the region, Sphenisco e.V, natural protection organizations, and friends of nature throughout the world are turning to the responsible parties in Chile, as well as the Chilean and international public. The cause of the concern is the current review of the Dominga Project from the company Andes Iron through the Servicio de Evaluaciõn Ambiental of the Coquimbo Region (the governmental organization responsible for environmental impact statement reviews, hereinafter SEA).

Between August 2012 and January 2015, this same SEA reviewed the application of the company CMP (Compania Minera del Pacífico S.A.), for a port project in the La Higuera/Chañaral Island area, and did so in an improper and insufficient manner, with the result that the project was approved. As a result, legal suits have been brought against this decision and are currently in process. This port is intended to be built in a marine region that houses numerous threatened species. Eight species of whale and nine species of dolphin regularly visit this area during their seasonal migrations, and use this area as a source of food. 70 Common bottlenose dolphin (Tursiops truncatus) live here permanently. This is the only group of this species that lives throughout the entire year in Chile. Here lie two marine protection areas: the Reserva Marina Islas Choros y Damas and the Reserva Marina Isla Chañaral and theNational Protection Area of the Humboldt Penguin (Reserva Nacional Pingüino de Humboldt).Together, these areas are the first and only protection areas for Humboldt Penguin on the planet, where approximately 13,000 breeding pairs live. These penguins represent 80% of the entire wild population of the threatened species of the Humboldt Penguin (spheniscus humboldti).

Although the marine areas of La Higuera/Chañaral Island in northern Chile are one of the 35 most important hotspots of biodiversity on the planet, that are particularly worthy of protection, the company CMP was not required to make any statements regarding the project’s impact on the environment. Thus the company was able to ignore the fact that the coastal area between Caleta Hornos and Chañaral Island is one unified ecosystem. CMP therefore did not have to answer to the impact on the federally-declared marine protection area that would be only 14 sea miles away. Nor did CMP have to answer to the 15 state-protected areas set up for the harvesting of shellfish, that would also be potentially endangered by the presence of a port at the intended location. The responsible governmental authorities pointed out the connection between the port and the danger to these protection areas from the very beginning of the review process, and required that the company address the impact of the environmentally-damaging emissions from the ship traffic that would result when the water currents transport the pollutants there. This requirement was not addressed in the environmental review and the project was nevertheless approved! No conditions were imposed upon CMP, as were demanded by the regional Sernapesca (the regional fishery authority) and Subpesca (the Undersecretariat for Fisheries and Aquaculture), such as rules for ship traffic or control measures to prevent the introduction of invasive species, etc.

Only the Regional Secretary for the Agriculture saw the causal relationship between the port project and the environment, and therefore voted against it. This situation functions as a portent of something calamitous and throws a peculiar light onto the political situation in Chile, when the dissenting vote resigns five days after the project’s approval, claiming alleged problems of a personal nature made the ability to remain in office impossible. When powerful interests are at play, reality has to step back (see also Letter to the President, from Coquimbo, 12 February, 2015 https://www.sphenisco.org/index.php.es).

It is feared that the current review of the Dominga Project (for the Company Andes Iron) will again not go through a thorough and correct examination of the environmental impact, and that the marine regions of La Higuera/Chañaral Island will be irreversibly damaged. It must not again be disregarded that

1. the planned port facility of Totoralillo Norte, also to be in the immediate vicinity of the main feeding area of threatened species such as the Humboldt Penguin (spheniscus humboldti), the sperm whale (Physetet macrocephalus), the Peruvian Diving-petrel (Pelecanoides garnoti) and that the ship traffic will also be routed through this feeding area.

2. the noise and vibrations of the expected ship traffic in an area, where for over the last 50 years no large ship has traveled, will have a negative impact on the breeding areas and therefore also disturb the reproduction of the affected species.

3. the Humboldt Stream flows from south to north and thus into the protected areas, and not, as the company attempted to maintain, from north to south. Therefore, the results of the expected emissions must be taken into account when conducting the environmental impact survey, and primarily the oil and fuel from the ships, the iron ore that falls from the ships and contaminate it, the release into the sea of concentrated salt brine from the planned desalinization plants, as well as the results of any potential ship accidents. These emissions would strain the water quality and endanger the designated protection areas, as well as the 15 managed shellfish harvest locations and five locations where aquaculture is done.

4. the planned desalinization through the sucking up of water from the sea would destroy many organisms that are the basis of the productivity of this marine area.

5. the danger of the significant productivity of this marine area would also endanger the livelihood of the citizens there. The current productivity allows the residents to generate meaningful revenue, through fishing, the harvesting of shellfish, and through tourism.

If the SEA continues with the motto, “the company Andes Iron is building a port, and the ship traffic and the emissions spread in the marine current have nothing to do with it”, they breach their own duties and allow private interests to dominate the common good. That would result in irreversible damage to the biodiversity in the marine areas of La Higuera/Chañaral Island, endanger the earnings of the residents of the area, and result in the country of Chile contravening its international commitments.

We call for the politically responsible parties to assess the Dominga Project (for the Company Andes Iron) based on real, objective conditions, and to review the approval process of CMP’s Cruz Grande port for irregularities.