In September 2016, the El Salvador Round-table on Climate Change released a statement urging the government to abandon its REDD plans. The statement is posted here in full, and is available in Spanish here.

The Salvadoran Round-Table on Climate Change (SLV-RCC), with the aim to contribute to the strengthening of the climate change policy framework in El Salvador, so that climate action at all levels ensures real and effective global mitigation of climate change causes, and enables timely and appropriate national and local adaptation,

Considering that the REDD-plus mechanism is:

The SLV-RCC highlights with concern that the current approach to climate change in El Salvador is focused on REDD-plus implementation; noting that:

Therefore, the SLV-RCC calls the Government of El Salvador, especially the Ministry of Environment and Natural Resources (MARN), the Ministry of Agriculture and Livestock (MAG), the Ministry of Education (MINED) and the municipal local governments, to abandon the implementation of REDD-plus initiatives in El Salvador and its variants, and the approaches, policies and programs that support it, attending urgently the following issues:

Exhort to the different non-governmental stakeholders and sectors which are interested and involved in REDD-plus implementation in El Salvador specifically through the PRREP-PREP in the territories of Apaneca-Ilamatepec, El Bajo Lempa, Trifinio-Cerrón Grande, Cordillera del Bálsamo and Goascorán–Golfo de Fonseca, and other areas, to:

The Salvadoran Roundtable on Climate Change affirms its commitment to continue contributing in a proactive manner, to the Salvadoran State in order to strengthen the policy framework and action to face climate change. 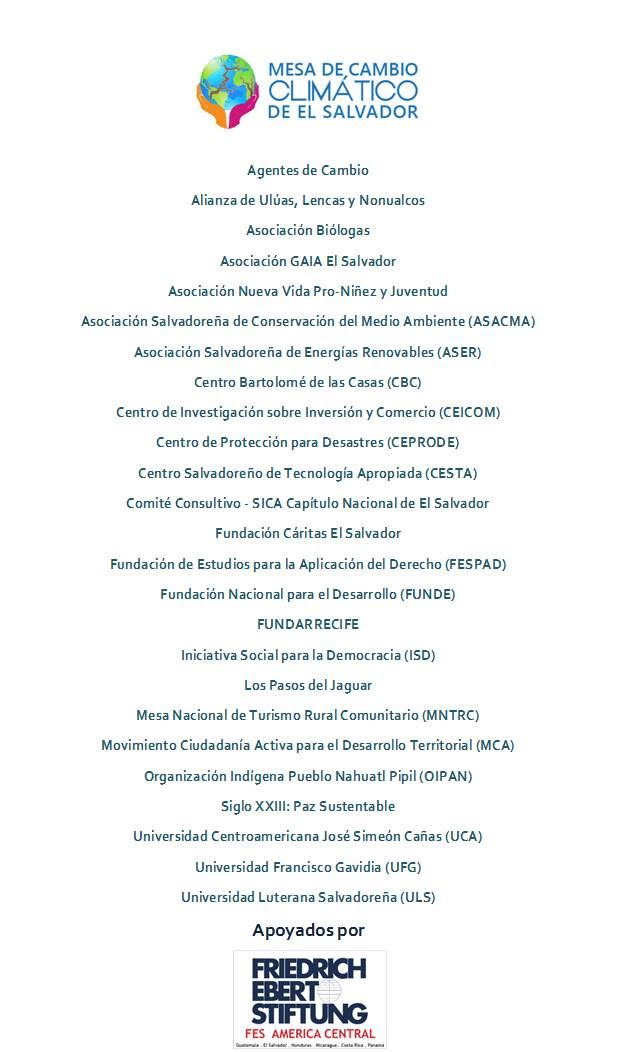