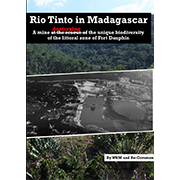 Representatives from the world’s most notorious mining companies are meeting at the ‘Responsible Extractives Summit’ in London, England, on 21 and 22 June. The World Rainforest Movement and Re:Common are joining London Mining Network in exposing the environmental destruction and human rights violations this industry is responsible for with the release of a new article about a biodiversity offset project used by Rio Tinto to greenwash destruction of a rare forest at the company’s ilmenite mine in south-eastern Madagascar.
The article shows how villagers at one of three biodiversity offset locations are left with only the sand dunes to cultivate their staple food, manioc and looks at the role that conservation NGOs and botanical institutions such as Kew and Missouri Botanical Gardens play in greenwashing a mining operation that is destroying a unique coastal forest and local peasant livelihoods to extract 40 years worth of raw material for the production of industrial white paint.