The following release and report from Biofuelwatch shows that relying on Bioenergy with Carbon Capture and Storage (BECCS) as a quick-fix climate solution “is nothing more than smoke and mirrors.” The release coincides with the global climate negotiations in Paris. BECCS has been referred to as the most “feasible” and “near term available” way of removing carbon from the atmosphere when it is, in fact, another false answer to climate change. 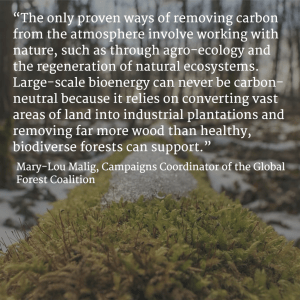 Paris, 1st December 2015 – The first in-depth and critical analysis of Bioenergy with Carbon Capture and Storage (BECCS) [1], a so-called “negative emissions” technology favoured by climate policy makers, has been published by Biofuelwatch [2] in Paris today, coinciding with the global climate negotiations. The negotiating text for Paris includes references to “net zero emissions”[3], which implies that it is possible to neutralise fossil fuel burning by sucking emitted carbon back out of the atmosphere  again. BECCS is widely promoted as the most “feasible” and “near term available” way of removing carbon from the atmosphere. However, Biofuelwatch’s report demonstrates that relying on BECCS to deliver “net zero emissions”  is no more credible than expecting carbon-sucking extra-terrestrials to do the job.

Report co-author Almuth Ernsting said: “Industry and even spokespersons of the International Panel on Climate Change are speaking about BECCS as if it was a saviour technology, a climate quick-fix that will allow us to continue burning fossil fuels and still avoid catastrophic climate change in the future. Our new report shows that BECCS is nothing more than smoke and mirrors.”
BECCS is the combination of bioenergy with Carbon Capture and Storage and, if implemented, would involve capturing CO2 from biomass-burning power stations or biofuel refineries, and pumping it underground.  The concept is based on the assumptions that large-scale bioenergy can be carbon neutral, or at least low carbon, and that burying some or all of the CO2 emitted will render it carbon-negative. It also assumes that CO2, once pumped underground, will definitely stay there forever, and that the technologies required for BECCS are technically and economically viable. Biofuelwatch’s report shows that each of those assumptions is based on wishful thinking rather than solid evidence.

BECCS proponents claim that the technology could in future remove as much as 10 billion tonnes of CO2 every year [4], more than a quarter of current global CO2 emissions.  This idea has risen to prominence since the International Panel on Climate Change (IPCC), published its most recent Assessment Report in 2014 [5].  Most of the models considered by the IPCC suggest that keeping global temperature rises to within 2oC will require BECCS in combination with reductions in greenhouse gas emissions.  Now campaigners that that policy-makers will be tricked into thinking that so-called “negative emissions” technologies can contribute to reducing global carbon emissions.

Mary-Lou Malig, Campaigns Coordinator of the Global Forest Coalition [6] states: “The only proven ways of removing carbon from the atmosphere involve working with nature, such as through agro-ecology and the regeneration of natural ecosystems.   Large-scale bioenergy can never be carbon-neutral because it relies on converting vast areas of land into industrial plantations and removing far more wood than healthy, biodiverse forests can support.”

Silvia Ribeiro, Latin America Director of ETC Group, adds: “Biofuelwatch’s report highlights how global efforts to tackle climate change are being distracted by the false hope of BECCS. The danger here is that policy makers and the public are falsely reassured that it’s okay to keep burning fossil fuels, because there’s a phantom technology that can scrub carbon out of the atmosphere again in the future. Which of course there isn’t. Even worse, as BECCS won´t function and climate chaos will increase, in some years geoengineers will tell us that we have nothing left but deploying other risky geoengineering techniques”.

[1] The report, Last-ditch option or wishful thinking – Bioenergy with Carbon Capture and Storage, can be found at http://www.biofuelwatch.org.uk/2015/beccs-report/.

[2] Biofuelwatch is a UK/US organisation that provides research, education and advocacy about the impacts of large-scale bioenergy: www.biofuelwatch.org.uk

[7] ETC Group (Action Group on Erosion, Technology and Concentration) works to address the socioeconomic and ecological issues surrounding new technologies that could have an impact on the world’s poorest and most vulnerable people: http://etcgroup.org/