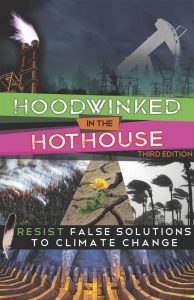 Note from GJEP: While this article from The Guardian takes on the false promises of so-called “carbon capture and storage” schemes as climate solutions, in fact the entire scam of “net zero” is a false solution.  It aims to allow ongoing climate change emissions by supposedly “offsetting” them elsewhere, but there is no credible science proving these schemes do anything but allow ongoing business as usual. For more on the various popular false solutions to climate change, you can visit Hoodwinked in the Hothouse, which is now available as a beautifully illustrated booklet and audiobook in multiple languages.

Carbon capture is not a solution to net zero emissions plans, report says

IEEFA’s report said that although carbon capture and storage is a 50-year-old technology, its results have been varied. Most CCS projects have since reused captured gas by pumping it into dwindling oil fields to help squeeze out the last drops, it pointed out.

The technology, put forward as part of the UK’s net zero strategy, could extend the life of fossil fuel infrastructure

Carbon capture and storage schemes, a key plank of many governments’ net zero plans, “is not a climate solution”, the author of a major new report on the technology has said.

Of the 13 projects examined for the study – accounting for about 55% of the world’s current operational capacity – seven underperformed, two failed and one was mothballed, the report found.

“Many international bodies and national government are relying on carbon capture in the fossil fuel sector to get to net zero, and it simply won’t work,” Bruce Robertson, the author of the IEEFA report, said.