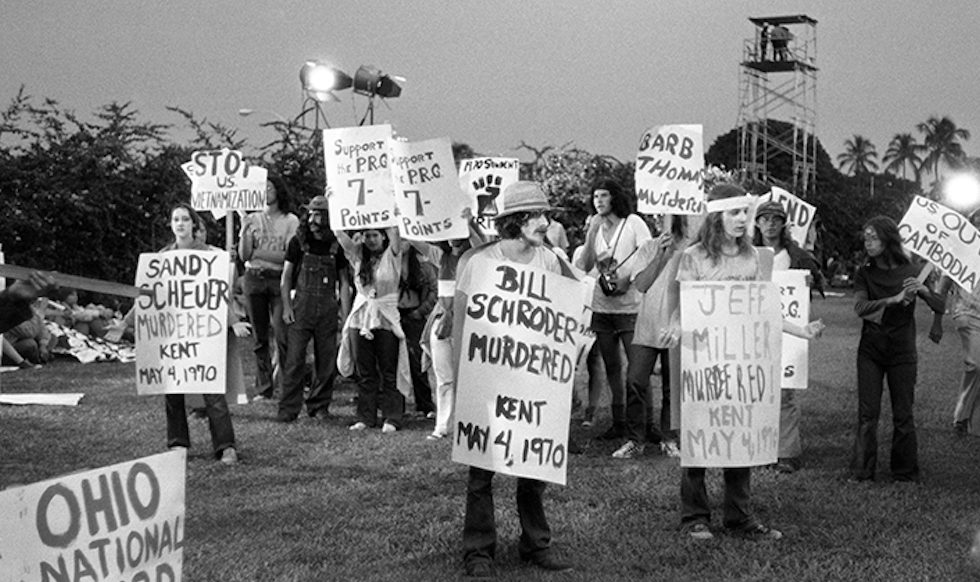 Protest against the Kent State Massacre during the 1972 Republican National Convention.  Photo: photolangelle.org

“… US History Still Churning in My Belly from 50 years ago – Viet Nam, Cambodia, Kent State, and Jackson State

A criminal invasion of Cambodia ordered by President Nixon on April 30, 1970 involved 8,000 US and as many ARVN troops conducting 13 major ground operations within 19 miles of the Cambodia–South Viet Nam border.

The first week of May 1970, no less than 30 on-campus ROTC buildings were burned or bombed. On May 4 in a horrendous case of excessive force, four Kent State University students are murdered when Ohio National Guardsmen take aim and fire during an intensive student protest that erupts with Nixon’s invasion of Cambodia. J. Edgar Hoover’s response to the violence is to blame it on the victims, going so far as to call one of the four slain Kent students a “slut.” On April 7, 1970, less than a month before the Kent State massacre, California Governor Ronald Reagan declared that “if it takes a bloodbath to silence the demonstrators, let’s get it over with.”

When Ohio National Guardsmen opened fire on the unarmed students demonstrating at Kent State at 12:24 pm that fateful Monday, May 4, (less that 4 months of my expected military separation) I felt the world had gone completely mad. I was driving from my office at England Air Force base in Louisiana to the base gym to play a little basketball when I heard about the shootings on my car radio, and the shock nearly numbed me. I stopped my car and just started weeping. Hundreds of guardsmen, under command of Ohio Governor Rhodes, had opened fire with a volley of 67 bullets in 13 seconds on the gathered students, and when the shooting was over, four had been murdered and nine wounded. Rhodes claimed his need to “preserve order,” and some of the guardsmen said they had fired in self-defense, but of the thirteen people shot, only two were hit frontally. Seven had bullets in their sides and four in their backs. Thus, most of the students were fleeing when they were hit, not advancing.

In early May 1970, the dean of Kent State Honors College, Myron J. Lunine, articulated four heavy psychological blows that served to enrage young people at Kent State and other campuses around the country: (1) President Nixon’s criminal invasion of the sovereign country of Cambodia even as troops were being withdrawn from Viet Nam; (2) the president’s labeling of dissenting students as “bums”; (3) the OCCUPATION of Kent State campus by heavily armed US military troops; and (4) Ohio State Governor Rhodes’ comment painting the student protesters a “worse than brown shirts . . . the worst kind of people we harbor in America.”

After May 4, outrage at the Cambodian invasion, combined with the Kent State shootings, prompted demonstrations to erupt nationwide, involving over 4 million students at 1,350 campuses—more than 50 percent of the nation’s campuses—and resulting in 536 schools being completely shut down for at least a short period, 51 for the remainder of the academic year. It was the first general student strike in US history.

May 14, 1970, student demonstration erupts at Jackson State University in Mississippi in response to Nixon’s expanded war and the drafting of Black students. Mississippi State Police arrived on campus to quell the disturbance. In a 28-second barrage of more than 400 bullets from shotguns, rifles, and a submachine gun aimed at a girls’ dormitory windows, two students were killed and fourteen others wee wounded, prompting one mother to cry, “They are killing our babies in Viet Nam and in our own backyard!”

We are a Vicious country that has remained saddled with the cultural “DNA” of two gruesome founding genocides committed with impunity for which we have never allowed ourselves to feel shame because of our fake religion of “exceptionaism”. We have never grown up and matured …”

Willson served in the US Air Force from 1966 to 1970, including several months as a combat security officer in Vietnam,  and later went on to join Vietnam Veterans Against the War and Veterans for Peace.

On September 1, 1987, while engaged in a protest against the shipping of U.S. weapons to Central America in the context of the Contra wars,[2] Willson and other members of a Veterans Peace Action Team blocked railroad tracks at the Concord, California Naval Weapons Station. An approaching train did not stop, and struck the veterans. Willson was hit, ultimately losing both legs below the knee while suffering a severe skull fracture with loss of his right frontal lobe. Subsequently, he discovered that he had been identified for more than a year as an FBI domestic “terrorist” suspect under President Reagan‘s anti-terrorist task force provisions and that the train crew that day had been advised not to stop the train.[3] Three days after Willson lost his legs over 10,000 people gathered for a non-violent gathering in support of Willson, and against arms shipments to Central America. (from Wikipedia)