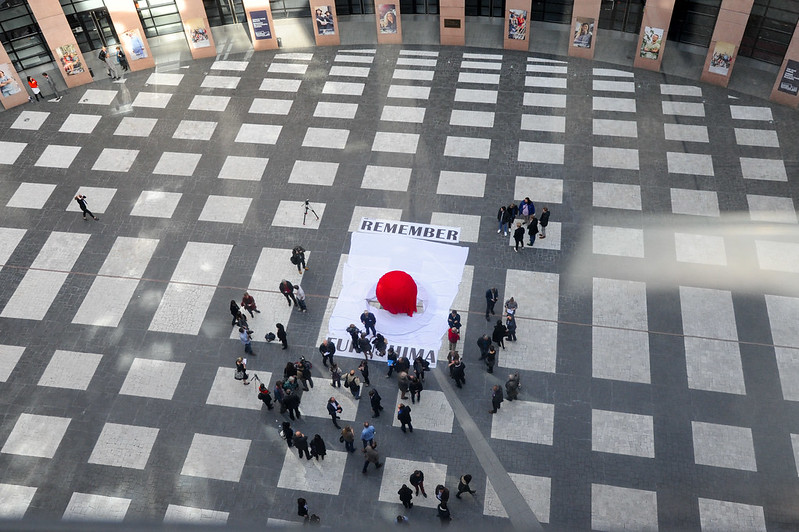 Remember Fukushima Photo: In 2014, On the third anniversary of the tragic events following the tsunami and the resulting nuclear disaster in Fukushima, Greens/EFA MEPs carried out a symbolic action to remember the disaster and its victims at the European Parliament in Strasbourg. This followed a press conference with Naoto Matsumura, the last man living in the forbidden zone of Fukushima, hosted by green MEPs Sandrine Bélier and Michele Rivasi. “Remember Fukushima” by greensefa is licensed under CC BY 2.0

Ten years ago, on the 11th of March 2011, ‘all hell broke loose’ in the Pacific coast of Japan. A huge Tsunami, triggered by the gigantic ‘Tohuku earthquake’, which swept away towns and villages, also hit the Fukushima Daiichi nuclear power plants on the coast, overwhelming the ‘defensive sea walls’. What followed is now well known to the whole world, as the live television coverage of the apocalyptic events streamed into all homes around the globe. Three of the six boiling-water nuclear reactors went completely out of control into meltdown spreading deadly radioactive materials, lakhs were evacuated, huge areas became uninhabitable for decades or even centuries, massive amounts of radioactively contaminated water was (and is still being) dumped into the Pacific ocean causing untold damage to marine life…….

And that disaster is still unfolding 10 years down the line, with no certainty about when the technologically and financially sound Japanese government and Corporate world (TEPCO owns and ran the Fukushima Daiichi NPP) will be able to fully contain and decommission these reactors. One was reminded of the 1986 Chernobyl disaster in then existing Soviet Union, as the only comparably horrendous nuclear disaster, both being classified at the highest rank of Level-7 in the deceptively named “International Nuclear and Radiological Events Scale INES”. These are Not just Events, these are apocalyptic events. Many such nuclear disasters have happened every decade, in many countries operating nuclear power projects, in various smaller scales.

And let’s not forget the cataclysmic nuclear bombings of Hiroshima (over 1200,000 dead from one small fission bomb) and Nagasaki. That’s not the end of nuclear bombs destructive story though, as the ‘nuclear powers’ have tested over 2000 of these nuclear weapons of mass destruction in several designated areas of the world. The tales of the major US testing site, the Marshal Islands and how its unsuspecting citizens were used as nuclear-exposure guinea pigs, is another horror story. Similar but lesser known stories exist from the Soviet nuclear test sites of Semipalatinsk in Kazakhstan, Novaya Zemlya and others, the French nuclear test sites of Reggane & Akker in Algeria and the Mururoa Atoll in the Pacific, the British test sites in the Australian territories of Monte Bello, Maralinga, Emu Field., and the Chinese test site of Lop Nur in the Uyghur Autonomous region.

The devastation that this nuclear fuel chain causes, starts right at the beginning, from the mining and refining of Uranium. One has only to visit the Indian mine sites of Jaduguda, Turamdih and Tummalapalle, to see the untold sufferings the local populations are undergoing. Lots of diseases, severely deformed chldren being born,…are commonplace in Jaduguda, the oldest of India’s Uranium mining sites. Even the newest – Tummlapalle in Andhra Pradesh, has started causing devastation within 8-9 years of operation. Anyone visiting the nearby villages of KK Kottala, Mabbuchintalapalle,…. will be struck by the cancerous lesions on skins of dozens of children, domestic animals strangely dying by the hundreds, the only cash crop of these oor villagers – banana plantations – being devastated by contamination from the mine wastes.

Why is it that the Govts of several countries are still pursuing this foolish and dangerous dream ? And most important for us, we the Indian Citizens must ask – Why India ? The “reason” offered by the Govt and Nuclear lobbyists was that – “a power starved country” like India needs a “reliable source” of electricity in nuclear. That “logic” was false earlier, and even more senseless now. Today, Indian installed Power capacity is about 375,000 MW (with a tiny part, just 6,780 MW contributed by nuclear), while the peak summer demands touch about 188,000 MW. About a hundred grid-connected power units are shut down due to lack of demand. All built with public financing. So, Why waste our hard earned savings into dangerous non-productive “assets”? Why indeed!

The World has changed from the 1960s and 1980s, when the world went gaga over Nuclear power. There were few alternatives then, and the mainstay coal power is heavily polluting. The situation has changed completely. Today, the Cheapest source of new electricity plants is Solar Photovoltaic or Wind turbines. Their per MW installation costs came down to less than Rs.5 crores/MW, while even a comparatively less costly PHWR nuclear power plant costs around 12 crores/MW. Generated power is also cheapest from Solar and Wind, at Rs.2.50–3.00 per KWHr. Nuclear power, taking subsidies into account, costs almost double. And what about the continuous stream of radioactive byproducts, which is poisoning our land-water-air, and will keep poisoning us and our children for thousands of years to come.

We the Citizens must demand from our governments — COME BACK TO SOME SENSIBILITY — SCRAP ALL NEW NUCLEAR (Fission) POWER PROGRAM, And Phase-out the existing ones in a Planned manner.
— Soumya Dutta.