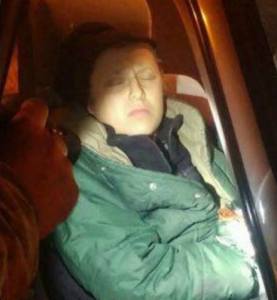 Boston, MA — Among the Spectra pipeline resisters scheduled to appear in West Roxbury District Court today is 22 year old Sophia Wilansky.  Sophia is one of the Mass Grave 6 defendants, along with Karenna Gore, daughter of former vice-president Al Gore, climate activist Tim DeChristopher, Norah Collins, Dave Publow, and Callista Womick.  Instead of appearing in the West Roxbury District Court, Sophia is in Hennepin County Medical Center in Minneapolis, Minnesota where she was airlifted after being critically injured by a concussion grenade at Standing Rock, ND. She faces a second surgery today as doctors attempt to save her left arm.

Sophia is among the thousands of supporters who have been standing with the Standing Rock Sioux Tribe to protect their water from the Dakota Access pipeline.  On Sunday night, police and national guard attacked the peaceful water protectors with rubber bullets, pepper spray, water cannons and concussion grenades.  Sofia was hit with a concussion grenade fired by the Morton County Sheriff’s Department.

This was the latest assault in an escalated campaign of violence and intimidation by the police against those who have been asserting indigenous and human rights.  Approximately 300 injuries were identified, triaged, assessed and treated by tribal physicians, nurses, paramedics and integrative healers working in collaboration with local emergency response. These 300 injuries were the direct result of excessive force by police over the course of 10 hours. In addition to Sophia’s injury, at least 26 seriously injured people had to be evacuated by ambulance to 3 area hospitals.

Today West Roxbury pipeline resisters, including Sophia’s co-defendants – Karenna Gore, Tim DeChristopher and others – clergy, and other supporters will gather in prayer, song, and solidarity on the courthouse steps at 8:45am before Sophia’s scheduled healing and again after the hearing (end time dependent on proceedings).

In a historic moment of nonviolent resistance thousands of people calling themselves protectors, not protestors, have gathered in North Dakota, to demand President Obama reject this dirty and dangerous proposal. If constructed, the Dakota Access pipeline would carry fracked oil from North Dakota to Illinois, cutting under the Missouri River less than a mile upstream from the Standing Rock Sioux’s drinking water supply as well as through the Tribe’s sacred and historical land. This pipeline is a threat to Native heritage, their homes, and will be a climate disaster.

WHAT: Gathering for Prayer, Song and Solidarity for Sophia Wilansky and 300 other water protectors injured Sunday by police at Standing Rock while peacefully opposing the Dakota Access Pipeline

WHO: Sophia’s co-defendants, clergy, and other Boston-area pipeline resisters.

WHEN: 8:45am and again after Sophia’s scheduled hearing (timing uncertain), Tuesday, November 22