Piñera Provokes Own Citizens Amid Covid-19 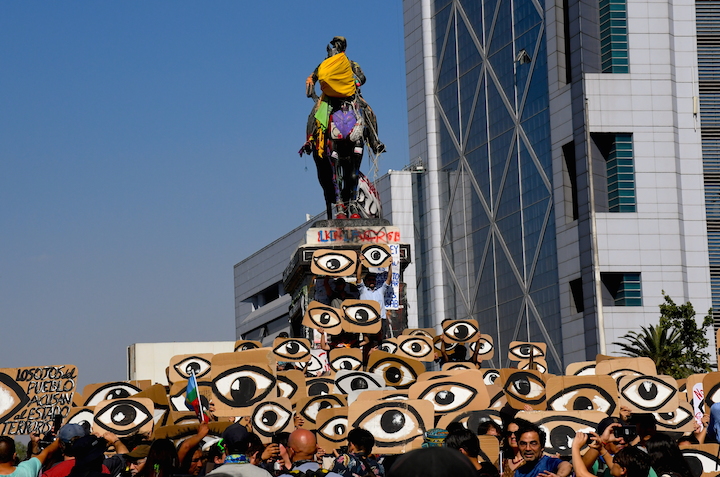 This protest filled Plaza de la Dignidad by the statue of Manuel Baquedano, heart of the protests in Santiago, on International Human Rights day 10 December last year. The eyes commemorate the 350+ eyes lost, some permanently, due to the violence of the Carabineros de Chile (national police) who intentionally shot people in the face with shotguns filled with rubber-coated metal pellets during the protests. By the end of 2019, 29 people had died in the uprising, with close to 2500 injured and over 2800 arrested.

Global Justice Ecology Project Statement: President Piñera deserves criticism for his continuing blatant disrespect for the people of Chile who have been in the streets –  many injured, killed, molested and arrested during the uprising that began in October 2019. The people have been demonstrating against the inequality forced upon them by the economic model of neoliberalism. The protests are on hold due to the COVID-19 quarantine, yet Piñera walked through the streets during the pandemic and posed in Plaza de la Dignidad, ground zero of the protests. GJEP’s Anne Petermann and Orin Langelle spent the latter part of last year documenting the peoples’ uprising. Langelle and Petermann will be having an exhibit of their Chilean work in photographs and video in Buffalo, NY’s ¡Buen Vivir! Gallery for Contemporary Art that is now postponed until a later date due to the pandemic.

Santiago de Chile, Apr 4 (Prensa Latina) The President of Chile, Sebastián Piñera, received a new round of criticism today for what some describe as a ‘communication blunder’ and most consider it a clear provocation.

The reason: on Friday afternoon, the president walked through the Plaza de la Dinidad, the center of mass protests against the president and now deserted due to the SARS-Cov-2 pandemic and in the middle of the Santiago area declared in total quarantine.

Surrounded by some escorts, he even took a photo sitting at the base of the monument to General Manuel Baquedado, just where among the many signs painted on the pedestal, one appears with the slogan ‘Renounce Piñera.’

The president’s presence was captured on his cell phones by numerous neighbors, who posted videos and photos on social networks that generated comments of all shades.
To read more visit Prensa Latina
print