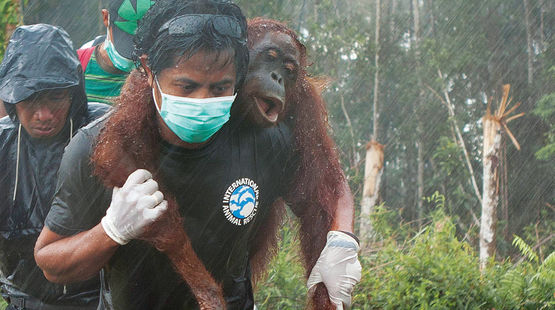 The wholesale destruction of rainforests on Borneo for the palm oil plantations of Bumitama Gunajaya Agro (BGA) is threatening the survival of orangutans. BGA is a member of the RSPO – the organization issuing the label for supposedly “sustainable” palm oil. Please call for a stop to deforestation and an end to palm oil imports NOW!

Flattened rainforests, orphaned proboscis monkeys, emaciated orangutans – the Indonesian palm oil company BGA is leaving a trail of destruction in its wake. In West Kalimantan province, the company is clearing irreplaceable primary forest – the habitat of protected orangutans and proboscis monkeys – in violation of the standards of the Roundtable for Sustainable Palm Oil (RSPO).

In April 2013, the NGOs Friends of Borneo and International Animal Rescue Indonesia filed an official complaint with the RSPO. We launched a petition at the time in support of their complaint.

In mid-November 2015, we received a letter from BGA requesting that we take down the petition. The problems of rainforest destruction that we criticized had allegedly been resolved and the company was now in compliance with RSPO standards. BGA assured us that it would “try” to do things right in future. The reports from our partners in Borneo paint a rather different picture.

Despite the promise to “do things right”, BGA continues to violate RSPO rules: on September 26, 2015, the NGO Link-AR Borneo and the community of Keklipor lodged a further complaint against unlawful activities by BGA on their land in West Kalimantan.

These and other cases are ample evidence that the RSPO seal is mere greenwashing. It does not prevent deforestation, loss of biodiversity, or even brutal land grabs against indigenous communities.

Please call for a stop to the destruction of Borneo’s rainforests and the unbridled expansion of oil palm plantations.

Despite its ruthless practices, palm oil producer BGA has been a member of the Roundtable for Sustainable Palm Oil (RSPO) since 2007. BGA’s customers include IOI, Wilmar and Sinar Mas, companies that sell the palm oil to European food and consumer goods manufacturers and biodiesel producers.