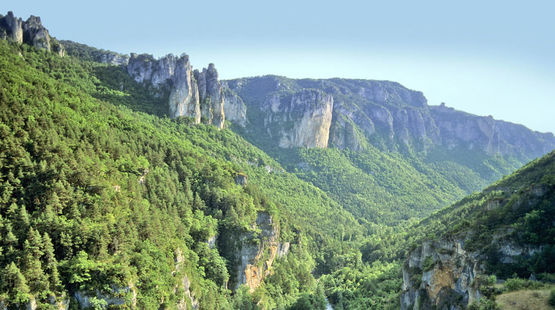 Residents, environmental campaigners and local authorities in southern France have been protesting against E.On’s biomass plans since they were first published several years ago. Nicholas Bell, a spokesperson from SOS Forêt du Sud [2], who coordinate the campaign in the region, states: ”E.On’s colossal new demand for wood will devastate forests from Cevennes National Park in France to forests overseas.  It is not too late for the company to stop those dangerous plans.”

The Open Letter  was initiated by German environmental campaigners who want to support the French civil society campaign by putting pressure on the German energy corporation E.On.  Peter Gerhardt from Denkhaus Bremen [3] explains: “It is unacceptable for E.On to seek to profit from renewable energy subsidies by contributing to the destruction of forests in France and elsewhere.”

Almuth Ernsting from Biofuelwatch [4]  adds: „Outdated coal power stations, including, the plant in Gardanne which had already been mothballed, are granted a second life by subsidies for biomass conversion.  Far from mitigating climate change, cutting down and burning trees makes it even worse.”

E.On had previously converted Ironbridge coal power station in England to wood pellets but decided to close it down following a serious fire.  The vast majority of the pellets burned in Ironbridge were imported from the southern US, many of them from the largest North American pellet producer, Enviva [5], whose practices have been widely condemned by conservation NGOs in the US.

Scot Quaranda from the Dogwood Alliance [4], an NGO dedicated to protecting southern US forests, explains: “The vast majority of wood pellets imported by European energy companies comes from the southern US, where pellet producers are targeting coastal wetland forests.  Those are amongst the world’s most biodiverse forest and aquatic ecosystems outside the tropics.  Burning them as ‘renewable energy’ makes a travesty of the term ‘renewable’.

The Open Letter is addressed at the directors of E.On and Uniper, a spin-off company recently formed by E.On which will otherwise be responsible for fossil fuel and for nuclear power station demolition, rather than for renewable energy.

[3] See http://denkhausbremen.de/clearcutting-of-forests-for-e-on-and-rwe/ for details of Denkhaus Bremen’s campaign against forest destruction for bioenergy

[3] Biofuelwatch is a UK/US organisation which re searches and campaigns on the impacts of large-scale industrial bioenergy: www.biofuelwatch.org.uk

[5] Enviva and E.On signed a multi-year pellet supply agreement in 2012, in respect of E,On’s conversion of Ironbridge Power Station: http://www.prnewswire.com/news-releases/enviva-eon-sign-multi-year-biomass-supply-contract-138768454.html.