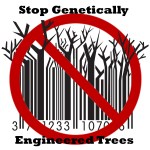 The Campaign to STOP GE Trees including Biofuelwatch, Canadian Biotechnology Action Network, Global Justice Ecology Project, Indigenous Environmental Network, World Rainforest Movement
Statement in Support of the “Open Letter to CTNBio”:
The Campaign to Stop GE Trees, an international coalition founded in 2004, supports a global ban on commercial deregulation of genetically engineered trees (also known as genetically modified trees) based on serious concerns about their impacts on biodiversity and human rights. The Campaign supports the position expressed herein, in solidarity with the “Open Letter to CTNBio” from Brazilian and Latin American groups, that calls upon CTNBio to reject the request by the Futuragene corporation for commercial approval of GE trees in Brazil.
The Campaign is joined by 140 organizations from 35 countries/regions that endorse the call for a global ban on the release of genetically engineered trees into the environment, as well as those scientists and organizations that are calling for a moratorium on the release of GE trees until they are proven to have no damaging social or ecological impacts. As no such proof of safety currently exists, but there is significant evidence to the contrary, the release of GE trees must be stopped.
It is, for example, well-documented that increasing the growth rates of plantation trees (as Suzano has done with their GE eucalyptus trees) results in the rapid expansion of plantations, not the opposite. According to the UN Food and Agriculture Organization between the years 1990 and 2010, the average yield of wood from plantations doubled, yet the amount of land occupied by those plantations increased over 60% from 97 million to 153 million hectares.
[http://www.fao.org/docrep/013/i1757e/i1757e.pdf, Table 5.5, page 94]
Additionally, in 2008, the UN Convention on Biological Diversity, to which Brazil is a signatory, called for the application of the Precautionary Approach regarding GE trees, and a comprehensive and transparent assessment of their long-term social and ecological risks prior to any open release into the environment. If CTN Bio approves the commercialization of the GE eucalyptus in question, this decision would directly contravene decision IX/5(1) of the UN Convention on Biological Diversity. <http://www.cbd.int/decision/cop/?id=11648>
The Conference of the Parties, Urges Parties to:
(r) Reaffirm the need to take a precautionary approach when addressing the issue of genetically modified trees;
(s) Authorize the release of genetically modified trees only after completion of studies in containment, including in greenhouse and confined field trials, in accordance with national legislation where existent, addressing long–term effects as well as thorough, comprehensive, science-based and transparent risk assessments to avoid possible negative environmental impacts on forest biological diversity; [1]/
(t) Also consider the potential socio-economic impacts of genetically modified trees as well as their potential impact on the livelihoods of indigenous and local communities;
(u) Acknowledge the entitlement of Parties, in accordance with their domestic legislation, to suspend the release of genetically modified trees, in particular where risk assessment so advises or where adequate capacities to undertake such assessment is not available;
(v) Further engage to develop risk-assessment criteria specifically for genetically modified trees;
(w) Note the results of the Norway – Canada Workshops on Risk Assessment for emerging applications for Living Modified Organisms (UNEP/CBD/BS/COP-MOP/4/INF/13);
(x) Welcome the decision of the fourth meeting of the Conference of the Parties serving as the meeting of the Parties to the Cartagena Protocol to establish an Ad Hoc Technical Expert Group on Risk Assessment and Risk Management that is also mandated to address the issue of genetically modified trees;
(y) Collaborate with relevant organizations on guidance for risk assessment of genetically modified trees and guidance addressing potential negative and positive environmental and socio – economic impacts on the conservation and sustainable use of forest biodiversity associated with the use of genetically modified trees;
(z) Provide the available information and the scientific evidence regarding the overall effects of genetically modified trees on the conservation and sustainable use of biological diversity to the Executive Secretary for dissemination through the clearing-house mechanism;
[1]/ Where applicable, risks such as cross-pollination and spreading of seeds should be specifically addressed.
We therefore support the call to CTNBio and the Brazilian government made by Brazilian and Latin American groups to reject the application of Futuragene to commercially plant genetically engineered eucalyptus trees.
Signed:
The Campaign to STOP GE Trees (International)