Occupation and Uprising in the Shawnee National Forest

Posted on September 9, 2019 by Anne Petermann 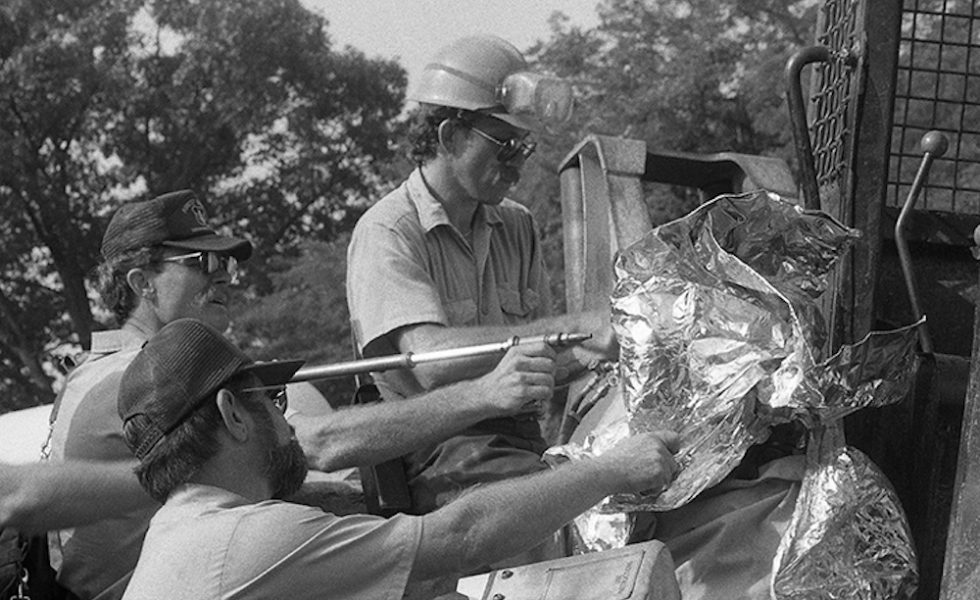 On his 30th birthday, John Wallace is removed from a logging skidder with a blowtorch after he locked his neck to the machine to stop logging in the Shawnee National Forest.  Photo: Langelle (1990)

Note: With this article, we look back at the historic campaign that shut down logging in the Shawnee National Forest for almost 2 decades as we prepare to convene The Resurgence: North American Forest and Climate Movement Convergence there this October 11-14 to find cutting edge new strategies to address the social justice, climate and deforestation crises.

Occupation and Uprising in the Shawnee National Forest

by Orin Langelle and John B. Wallace

The occupation of the Fairview Timber Sale area in the Shawnee National Forest in southern Illinois lasted for 79 days – at that time the longest occupation in Earth First! history. The area slated to be cut was rich in biodiversity, a haven for songbirds, and loved by the many locals who went there to watch the birds, camp, or enjoy nature.

Earth First!ers in the Shawnee publicly stood in solidarity with the Mohawks during the Oka Crisis; the 78-day standoff between Mohawk protesters, police, and the army in Canada.

The Shawnee defenders also stood in solidarity with Redwood Summer, a major national mobilization to save the last of the ancient redwoods. Earlier that year, EF! Redwood Summer organizer Judi Bari was almost killed when a pipe bomb exploded under the seat of the car she was driving.

There was a lot of support during the occupation. Local organic growers donated more food than the camp could use and even the postmaster for the area gave the encampment a postal mailbox so mail could be delivered to the forest defenders.

By the time the occupiers were removed, the protest in the Shawnee was evening news in Illinois and many parts of Kentucky, Indiana and Missouri. The major daily newspaper in Springfield, IL, the state’s capital, called the occupation “a popular uprising.”

On day 79, the encampment was raided and many were arrested as the bulldozers moved in. Following the next day of mass protest, civil disobedience, and multiple arrests, the 7th Circuit appellate court in Chicago issued a stay on day two of the logging operations.

Even though the Illinois U.S. Congressional Delegation formally submitted a request that the agency halt logging, the stay was eventually lifted. Even with daily protests and more than thirty arrests, the Forest Service eventually logged Fairview in the fall of 1991. The project cost federal taxpayers more than ten times the amount that the logging company paid to cut the forest.

While it took several years, Fairview was the beginning of the end to the Shawnee timber program for two decades. Litigation led to a court issuing a permanent injunction on the Forest Service’s 1992 management plan for the Shawnee. The injunction prevented logging, oil and gas leasing, and off highway vehicle usage for 17 years. After petitioning the court, the Forest Service won a motion to lift the injunction in 2013.

Once the injunction was removed, the Forest Service quickly began plodding down the same path and started preparing logging projects. This time they combined the logging operations with much larger – “restoration” – projects, that make up thousands of acres and natural maintenance areas. This was clearly done to make it more difficult to track the actual prices logging companies were paying for the trees.  The project proposals also include prescriptions for massive burning (1,000 to 3,000 acres) and extensive herbicide use.

Shawnee Forest Defense! is a new group of local residents who are rooted in the spirit of past Shawnee resistance and are standing firm for our future. This group of people started organizing following a Heartwood training workshop in 2017. Folks have been letter writing, attending forums, and speaking out. A second training workshop in October of last year, coupled with the UN’s Intergovernmental Panel on Climate Change Report, has inspired more people to step up and get involved.

This fall, we will be hosting The Resurgence: 2019 North American Forest and Climate Movement Convergence in the Shawnee from October 11th to October 14th. Come join us!

Orin Langelle is a concerned/activist photographer, who for over four decades has been documenting peoples’ resistance to war, corporate globalization, ecological destruction and human rights abuses. John B. Wallace is part of Shawnee Forest Defense! Both Wallace and Langelle were organizers during the Shawnee National Forest Occupation. Many people who participated in the events discussed in the above article will be present at this October’s gathering in the Shawnee Forest.