November 15th is the #NoDAPL Day of Action at Army Corps of Engineers.  To view all of the actions planned for today, click here

COLUMBUS — Police shut down Broad at 3rd and at High after a protester parked a “No DAPL” van in the intersection and got underneath the vehicle. That protester is refusing to come out.

Other protesters watching from the sidewalk began chanting “bring our troopers home” and “water is life” while Columbus police and firefighters worked to get the protester from out under the vehicle. Police brought in bomb-sniffing dogs as a precaution and after clearing the vehicle, are now working to free the man using a special saw.

The protest is part of an ongoing nationwide protest against the $3.8 billion Dakota Access pipeline. The company building pipeline is seeking a federal court’s permission to lay pipe under a Missouri River reservoir in North Dakota and finish the four-state project.

The Army Corps of Engineers on Monday called for more study and input from the Standing Rock Sioux before it decides whether to allow the pipeline to cross under Lake Oahe. The 1,200-mile pipeline that’s to carry North Dakota oil through South Dakota and Iowa to a shipping point in Illinois is largely complete except for that stretch, which will skirt the tribe’s reservation. The tribe says the pipeline threatens drinking water and cultural sites.

Rally at the Army Corps of Engineers in San Francisco 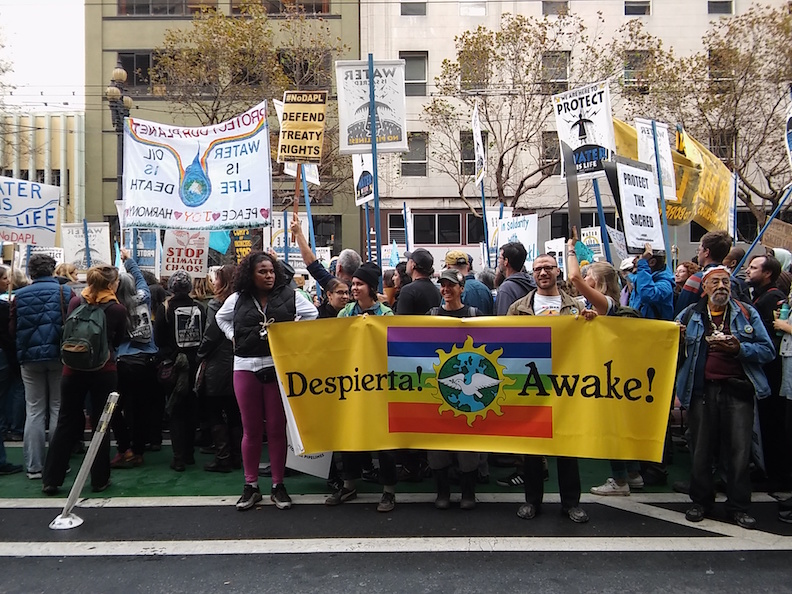