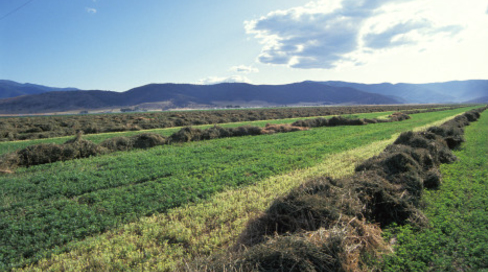 An excerpt from “Food For Thought,” the Center For Food Safety Blog. See the full article here.
By Bill Freese Science Policy Analyst, Center for Food Safety
A recent study by USDA scientists shows that genetically engineered (GE) alfalfa has gone wild, in a big way, in alfalfa-growing parts of the West.  This feral GE alfalfa may help explain a number of transgenic contamination episodes over the past few years that have cost American alfalfa growers and exporters millions of dollars in lost revenue.  And it also exposes the failure of USDA’s “coexistence” policy for GE and traditional crops.

The U.S. Dept. of Agriculture (USDA) has long maintained that genetically engineered (GE) crops can co-exist with traditional and organic agriculture. According to this “co-existence” narrative, if neighboring GE and traditional farmers just sort things out among themselves and follow “best management practices,” transgenes will be confined to GE crops and the fields where they are planted.

The latest evidence refuting USDA’s co-existence fairytale comes from a recently published study by a team of USDA scientists. The study involved Monsanto’s Roundup Ready alfalfa, which, like most GE crops in the U.S. is engineered to survive direct spraying with Roundup, Monsanto’s flagship herbicide.

In 2011 and 2012, USDA scientist Stephanie Greene and her team scouted the roadsides of three important alfalfa-growing areas – in California, Idaho and Washington – for feral (wild) alfalfa stands. Because alfalfa is a hardy perennial plant, it readily forms self-sustaining feral populations that persist for years wherever the crop is grown.

Greene and colleagues found 404 feral alfalfa populations on roadsides. Testing revealed that over one-quarter (27%) of them contained transgenic alfalfa – that is, plants that tested positive for the Roundup Ready gene.  They believe that most of these feral populations likely grew from seeds spilled during alfalfa production or transport.

However, the researchers also found clear evidence that the Roundup Ready gene was being spread by bees, which are known to cross-pollinate alfalfa populations separated by up to several miles. Their results suggested that “transgenic plants could spread transgenes to neighboring feral plants, and potentially to neighboring non-GE fields” (emphasis added).  While they did not test this latter possibility, there is no doubt that non-GE alfalfa has in fact been transgenically contaminated – not just once, but on many occasions.