Field tests continue in many countries despite risks to forests

Halifax, Nova Scotia, Canada – Today, the Canadian Biotechnology Action Network (CBAN) and The Campaign to STOP GE Trees published a major report that details the status of development of genetically engineered (GE or genetically modified) trees around the world. The report is published in English, Spanish and Portuguese. 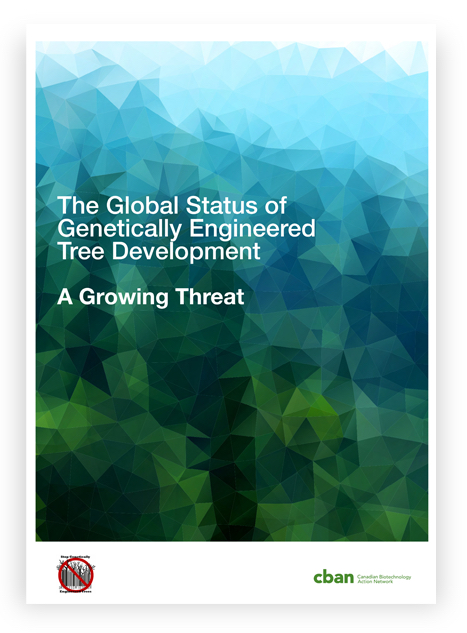 “Development of genetically engineered trees is advancing despite the serious risks to our forests and continued opposition around the world,” said Lucy Sharratt of CBAN. “Our report shows that genetic engineered trees are closer than ever to being released even though interest is limited to just a handful of companies and university researchers.”

The report is published ahead of the Forest Stewardship Council (FSC) General Assembly on October 9-14 in Bali, Indonesia. The FSC, which runs a global market-based certification program for forest products, is in the process of reconsidering its current prohibition on GE trees. In Bali, FSC members will vote on two motions that, if approved, would help uphold the FSC ban on genetic engineering.

“If the Forest Stewardship Council decides to embrace genetic engineering, it will free the Brazilian pulp and paper company Suzano to begin planting its eucalyptus trees that are genetically engineered to tolerate glyphosate herbicides,” said Lizzie Díaz of the World Rainforest Movement.

FSC’s prohibition on GE trees in its certification program currently stands in the way of the FSC-certified company Suzano’s plans to plant GE trees in Brazil. The Brazilian government approved Suzano’s application to commercially plant a GE herbicide-tolerant (glyphosate-tolerant) eucalyptus tree on November 16, 2021. However, Suzano can only plant its GE tree if the FSC overturns its current policy that prohibits certified companies from growing GE trees commercially, or if Suzano leaves the FSC.

The new report discusses how the use of Suzano’s GE glyphosate-tolerant tree would likely result in increased use of glyphosate-based herbicides on eucalyptus plantations that already negatively impact the environment as well as many local communities and Indigenous peoples. Its approval in Brazil was denounced by 33 Brazilian environmental and social justice groups.

“Genetically engineered trees are not inevitable. Even if the research is very far advanced, or even approved for planting, GE trees still might never make it to market,” said Sharratt. “Genetic engineering in trees is technically challenging, extremely risky for the environment, and globally, it’s very controversial.”

The report also notes, however, that recent changes in national regulations around the world may speed up the release of GE trees. Many governments are removing their oversight over some plants developed with the new genetically engineering techniques of gene editing. These political developments could result in many unrecorded, unregulated field tests of GE trees and even the commercial release of some GE trees without government risk assessments or even notification to governments.

The report and its Executive Summary are posted in the three languages at www.stopGEtrees.org/global-status-report.

The report is accompanied by a briefing about the Forest Stewardship Council at www.stopGEtrees.org/FSCbriefing.